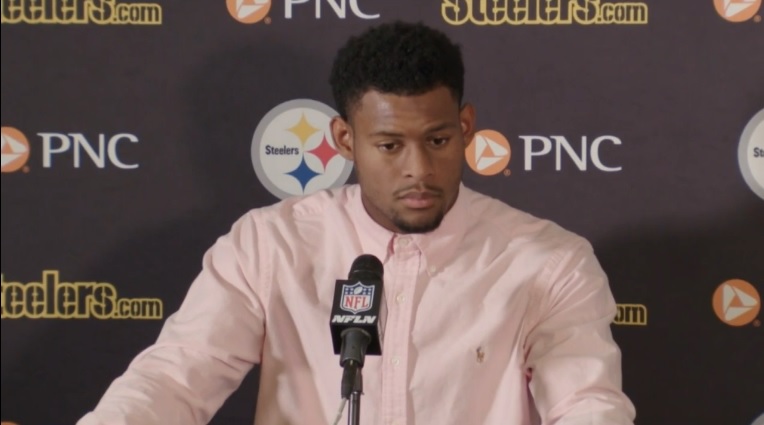 JuJu Smith-Schuster has been the talk of the Pittsburgh sports world for the last seven days. On his first chance in the national stage, he had the best game of his young career, catching seven passes for 193 yards and a touchdown. His stardom has seemingly grown overnight for a city that’s embraced him. And he’s embraced it right back.

“I love it here man,” the rookie told reporters following the game. “This is my second home. I think the fans are amazing. With the bike being stolen, the people in Pittsburgh helping to get it back. It shows a lot. I love this city. I love the fans. I love the people. I love my teammates.”

The coaches have loved him too. Despite being snake-bitten with injuries during training camp, stunting his growth, he’s picked things up quickly as the season’s gone by. First by eating into Eli Rogers’ snaps in the slot and then Martavis Bryant’s on the outside. With Bryant inactive last night, Smith-Schuster was the unquestioned starter. He played 51 snaps, 80%, in the victory while Eli Rogers and Justin Hunter hovered around the 20 snap mark.

As players have mentioned and we’ve written about, Smith-Schuster’s fun-loving personality has been a breath of fresh air in the sometimes stuffy world of the NFL. Combine that with the league relaxing on some of their celebration penalties, and you get fun moments like Le’Veon Bell’s bench press after his touchdown. Smith-Schuster said each player has their own celebration.

“We all came up with celebrations for everybody. So when AB scored, we were like, let’s do the AB celebration. when Le’Veon scored, Le’Veon’s doing the bench, he’s lifting. Me, I’ll be anything. I’ll be the prop.”

JuJu served as the platform for Bell’s bench press celebration, which blew up on Twitter.

On that primetime workout plan. ? pic.twitter.com/vFKPmG1WD7

The Steelers had to table Brown’s celebration after offensive pass interference waved the score off. But Smith-Schuster says there’s about 15-20 celebrations he’s come up with, all jotted down on his iPhone, and “the more people we can get in, the better.”

As you can see in Bell’s touchdown, nearly all of the offensive linemen got involved. If only they can convince Ben Roethlisberger to join in.

Roethlisberger was asked about Smith-Schuster’s personality.

“It’s energizing. It’s fun. My locker was next to his in [the Lions’ locker room]. He had a great game.”

Fun indeed. Especially when you win. Which Smith-Schuster has continued to help the Steelers accomplish.