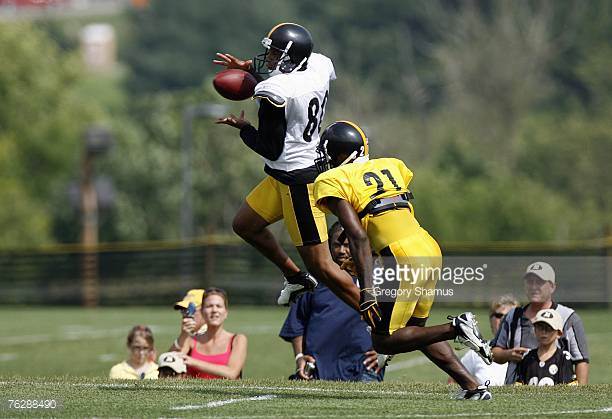 Bringing you another Pittsburgh Steelers’ interview courtesy of our good friend Ron Lippock of the Pittsburgh Sports Daily Bulletin. Today, Ron chats with former Steelers’ cornerback Ricardo Colclough, the team’s 2nd round pick in 2004. They talk about what it’s like to be the only player from Tusculum to appear in the NFL, how tough it was to be cut, and what it was like to go on their 2005 Super Bowl run.

First, tell me a bit about what you’ve been doing since your time in the NFL?

Now, I’m actually helping out at a local high school here in Miami – coaching their secondary. I’m coaching the varsity and JV team. Also, me and my father-in-law also started a contracting business. I’m just trying to keep busy and get out of the house a bit!

Tell me a bit about the coaching – who when you played influenced how you coach now, and how?

Just really over the years of playing the game. you get a lot of wisdom. I try to compile a lot of the things I’ve learned – the mistakes – and try to give those learnings to the kids I work with now. They have hopes and aspirations to make it to the NFL but it’s not an easy road – I try to instill that into the players I have.

Before practice there can be a lot of laughter and giggling and stuff, but once practice starts it’s time to go to work. It’s ok to laugh in between practices, but nobody likes to lose. If you think it’s funny then you’re in the wrong sport. Also – don’t be worried if I’m coaching you hard – you should be worried when I’m not talking to you. I try not to push too much. I see a few kids with natural ability and that could be something when they get older and learn how to use their bodies better. I try to give them the tools.

Tell me a bit about being the first – and only – player to make it to the NFL from Tusculum. How much pressure was that for you and were you surprised at being taken by Pittsburgh?

I tell this to my kids a lot. Honestly, it was surprise to me. When I was in school I just played the game to get an education and get away from the things I grew up around. My goal and dream was to get out of that area – to get away from that city before something happened to me or I ended up behind bars. My dream of playing in the NFL was always there – but what were the odds? I never thought it would happen, even when a lot of agents and teams showed interest. I never bought into it – especially coming from a smaller school, like you said. I just wanted to prove myself, and when it finally happened, it was a dream.

Did the team show interest beforehand?

I remember when I visited Pittsburgh, I sat down with Cowher and we talked about stuff. I distinctly remember Ray Horton and Ike Taylor coming up to me – I think Ike came to size me up – he may have heard stories about me being from a smaller school. At the time, Ike was a different guy then he ended up being in his career, in a different place in his career. He was a great guy and ended up being a great mentor to me – he Deshea and Troy.

But I remember Ray telling me to enjoy the process. That whatever happens to play fast. And that’s what I tried to do. I worked hard to push myself to what I felt was my breaking point.

What advice did Ike and those other guys give you?

A lot of times those younger guys come in to the NFL, they burn the candle at both ends of the stick. They are long days – in early and not back until 5:00, and the next day you have to do it all over again. They talked to me about not staying up late and going out late. Ike and those other guys explained that to me.

That mentoring happened more in Pittsburgh than in other places. It was like a family thing. Losing or wining, we always got together as a team. No one guy led it. We just always made plans to go out together. It wasn’t always the secondary either. We’d go to Benihanas on Monday nights and watch Monday Night Football, that kind of thing. We had that group connection – on and off the field.

What was your biggest adjustment to the NFL?

Speed – definitely the speed of the game. When I first got there, in OTAs and mini-camp, it was a big adjustment. Especially coming from a smaller school, we didn’t have that a lot. It was just a mindset for me – the more reps I got the more comfortable I got with it.

Tell me a fun story about your time there.

Oh there are a lot of stories about times as a rookie. You know they always wanted the rookies to sing then. Well, in the chow hall they had me and a couple of other guys sing. Later that day in the defensive backs meeting, they told me to sing again. I refused – I told them I already sang earlier.

Well, the next day in practice, I knew something was coming. When practice ended, as I was walking back, I looked behind me and Joey {Porter} was behind me. I just told him alright, get me then, and I dropped my pads. Well they took tape and tied me to the goalpost and poured every bucket of water they had over my head – and left me there. The trainer had to come out later and cut me loose! It was all fun and games – it all brought the team closer together.

Tell me about your memories of the Super Bowl season you experienced?

It was amazing – but more because of the way we got there. We started off with a losing streak that season and were on the verge of being out of the playoffs. Nobody I can think of gave us a chance – every game was on the road in the playoffs – at Denver, Indy…Then to cap it off in Detroit, sending Jerome off on a high note. That was the pinnacle of everything we went though.

We were a tight team and that showed it. We had a ton of adversity but no one questioned each other or the coaches. We trusted how hard we were working. That in the whole body of things meant more – not just the Super Bowl itself. That was unbelievable. I can’t put it into words what that all felt like.

How hard was it in 2007 when you were released – what were you told?

The time comes as a player that you get the feeling when coaches are going in a different direction. It hurt – but I looked at it as a new chapter – a new beginning. I looked at those players as my brothers on and off the field. They were my family away from my family. I have a lot of ties with those guys still. The bonds I had – I still have a lot of them. It was hard to leave and go to another city. Especially when I had to face them afterwards on the field! I couldn’t be buddy-buddy with them anymore. It was weird. It took time to adjust to it.

How did they tell you you were being released?

Coach Tomlin sat me down and told me I was working hard but they were going a different route. They were shorthanded at some positions – they had a lot of injuries. I told him I understood. Some guys may have been upset but I didn’t have hard feelings. I could see it coming as my minutes were going down…

Any advice you’d give young guys entering the NFL today?

Don’t think you know everything. Be coachable. Play every play like it’s your last – give it all you got. If I could put into my twenty-two year old body then what I know now I’d have been a different player. Just going through those growing pains – sometimes you just have to go through things to grow.

After leaving Pittsburgh I became a better student of the game. I watched more film. I watched before but I did after to a greater extend. I wasn’t breaking it down like I should before. I wasn’t seeing what the coaches saw. I was trying to look at it though their eyes but I didn’t know what they knew so I didn’t pick up some things. I learned to look at the film through my own eyes and learned different techniques and to let the game come to me. A lot of young guys try to force themselves on the game. But sometimes you have to let it come to you.