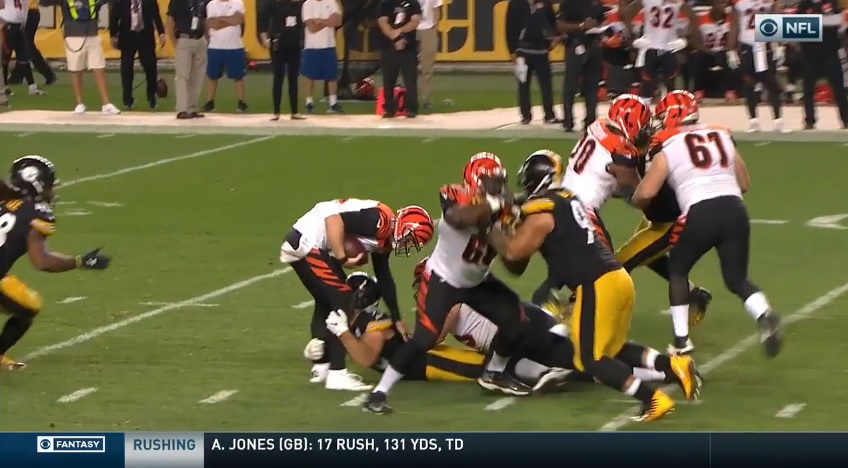 Quick film room for you guys today. The Pittsburgh Steelers sacked Andy Dalton four times this weekend. Two of those came off identical concepts, T/E stunts that sent the outside linebacker crashing up the middle and into the arms of the quarterback. Let’s look at the two, one by T.J. Watt and the other by Bud Dupree.

The first by Watt. T/E stunt between him and Cam Heyward. Watt crashes down the B gap first with Heyward looping over. There’s no stunt to the other side, they play it straight up. This is a little sloppy but Watt’s athleticism lets him shoot the gap and the tackle isn’t sure if he’s trading him off or not. Watt barrels into the guard as he’s falling down but manages to wrap Dalton up and drag him down.

The second sack, by Dupree, is a little more conventional. Same idea, T/E stunt with Tyson Alualu while the other side plays it straight up. Alualu, the looper, goes first and acts as the contain player. Dupree rushes second, they do that so the two don’t get bunched up, and crashes in from behind to target the A gap.

The right guard and right tackle don’t communicate the stunt effectively, both sliding towards Alualu when the guard has to pass him off. Dupree is free up the gut and chases Dalton down. Another sack.

Two effective playcalls. Good contain on each side, that’s really critical anytime you run one of these “games,” and the crashers do their job. Another effective way to get home with just a four man rush, maximizing pressure.