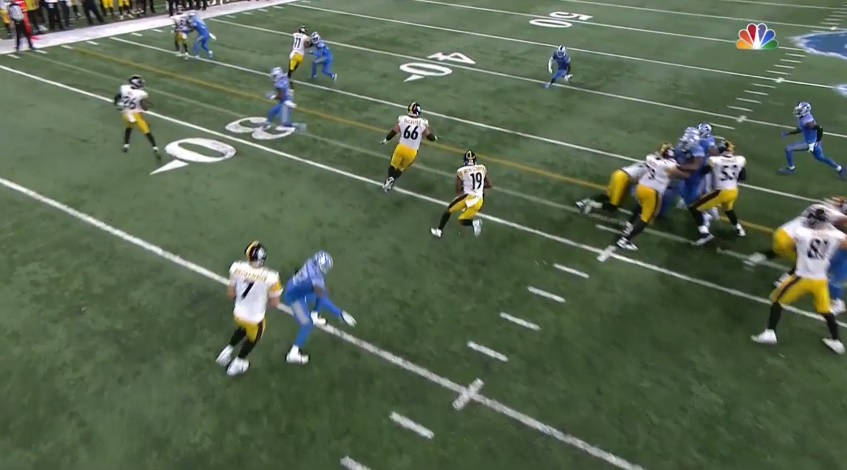 With all the fight the Pittsburgh Steelers showed, they needed one play to seal the deal. 3rd and 1, 1:29 remaining in the game. Fail to convert and you give the Detroit Lions another chance to steal the game. Pick up the first and the game is over.

Todd Haley ran a shovel pass, Ben Roethlisberger complete to JuJu Smith-Schuster. A gain of four, a first down, and a victory. It was a great call for two reasons.

1. It’s part of the Steelers playbook, an effective play they’ve run before.

2. The Lions were vulnerable to it.

Pittsburgh has used this play before. It was Smith-Schuster’s first touchdown of his career back in Week Two against the Minnesota Vikings.

Which was the same playcall last night. One the Lions have been beat with, too. I didn’t include it in my report but the Carolina Panthers ran the same play for a two yard touchdown in Week 5.

So it’s not a surprise to hear Roethlisberger say the shovel pass was one of their two-point/gotta have it playcalls.

“We just had been holding it in our pocket,” he said after the game. “It’s a play that we liked, had a lot of options. We had it as kind of a two point play. It was a good must-make type situation…just worked out well for us.”

Best of both worlds. Didn’t have to change or add to the playbook if you’re the Steelers. The play was already there. And you use a concept that’s worked against the defense you’re facing. All in the game’s biggest moment. Great call. Great execution. Great win.