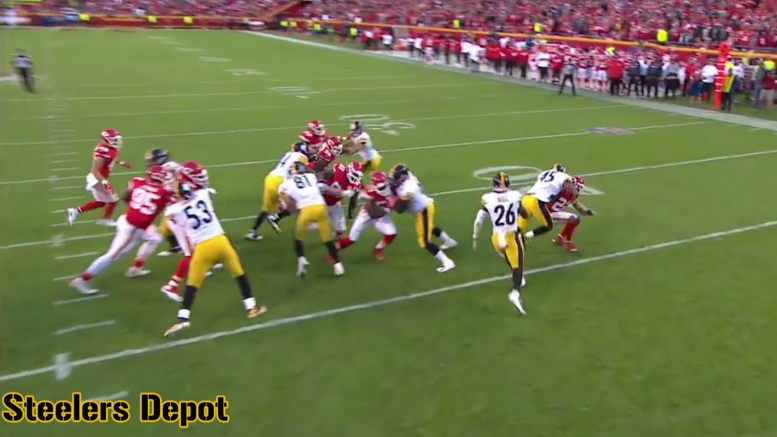 I think it’s fair to say that the most unfortunate byproduct of the Pittsburgh Steelers’ struggles in the running game this season prior to Sunday’s contest is the fact that it had essentially deprived us of highlights featuring fullback Roosevelt Nix.

But that changed in Kansas City amidst an active and aggressive strategy committed to running the football, especially early in the game, and late—though in the early portions of the game, they did so primarily out of 11 and 12 looks, with much of Nix’s playing time devoted to closing out the night.

And the funny thing is—well, at least I find it amusing—that his first ‘highlight’ of the day actually came on a passing play. in the middle of the second quarter, with the offense backed up at their own one, they set up out of the 22 personnel as though they were going to run.

Of course, they didn’t. Vance McDonald recorded his first reception of the season for 26 yards, but that didn’t stop Nix from committing to selling his run block up the middle. While he remained composed because overaggressiveness could open up a rushing lane, you can see his typical demeanor here.

Pretty much the rest of the highlights come in the fourth quarter, and they start with the Steelers again backed up in their own end. On second and nine, they just shot him up the B Gap, completely levelling off the inside linebacker, sealing him outside of a running lane for a 12-yard gain.

They kept at it on the next play, incorporating a false step left before both Nix and Le’Veon Bell peeled off to the right edge. The fullback sent Marcus Peters spilling to the ground with authority on the perimeter, opening up the right sideline for a 27-yard gain, a season-long.

There were other, longer gains on which he played a less prominent role, but there are still two later plays I want to look at. On a four-yard run on first down one play later, he really did the same thing—just through the opposite gap—as the play two above, sealing off the inside linebacker through the hole.

Later, on the start of the next possession, he met the linebacker through the gap yet again, this time off the right side. Nix let him win the leverage battle, getting lower than the fullback, but that just more easily enabled him to put him on the ground.

I don’t know how he would fare as a fan favorite on some other teams, but in Pittsburgh, the fans remember the power running game quite fondly, and Nix is a throwback in that regard. He is fun to watch, and is only getting better and better as his job in year three.