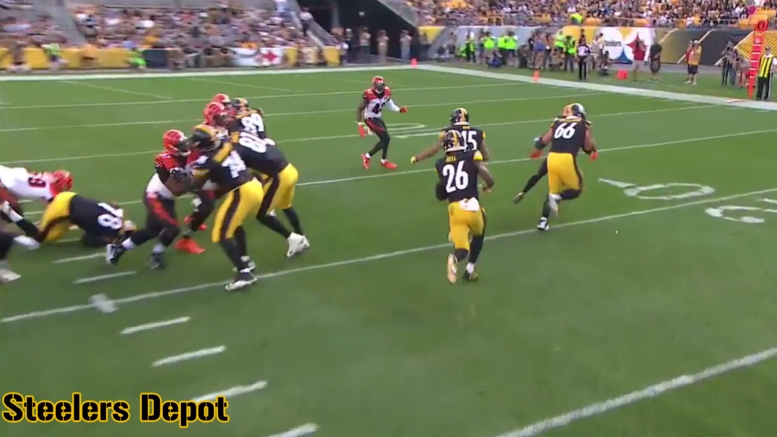 A lot of people have adopted Pittsburgh Steelers fullback Roosevelt Nix as their favorite player, and really, it’s hard to blame them. He plays with passion, intensity, and physicality that has an infectious quality to it and is hard to miss.

Pittsburgh is of course a place that has always loved its fullbacks, except when Bruce Arians was here, so it’s no surprise that the fullback is a popular guy, but Nix is something a little above and beyond. Of course, he’s also a special teams demon and weekly seems close to blocking at least one punt, having done so twice in preseason play.

But this week I want to take a look at some of the work that he did on offense. I think he played some of the highest snap totals in his career on Sunday against the Bengals, with the Steelers turning the game over to their ground attack in the late stages to grind out a 29-14 win, seeing 20 snaps, excluding the victory formation.

The Steelers came out of the gate with a pretty diverse set of plays and personnel, but the first run they were able to break came a few minutes into the game. On a fresh set of downs, they went heavy out of the 22 personnel set, pulling the right guard around right end. Nix blew up safety George Iloka in the hole get Le’Veon Bell free for 11.

Later in the first quarter, from another 22 set, Nix met with linebacker Nick Vigil in the right-side B Gap, but the Bengals had the numbers toward that side of the field, in spite of the fact that both tight ends were aligned off the left side.

Skipping ahead, early in the second half, and once again from the 22 personnel, we saw them run the same play as the first above, David DeCastro pulling and the tight ends sealing the edge. Nix was able to pick off the linebacker in the hole as Bell got free for 15.

Later on the same drive, on second and six, and still out of 22, Nix led his running back right up the gut for the needed yardage. The overall blocking on the left side was not sustained for long, but it did the job to move the chains.

Late in the game, the Steelers ran the ball on third and four from the Bengals’ 10. You can guess the personnel. But this time they split the tight ends and to the left. Nix picked up Vontaze Burfict in the hole, but the blocking could only get Bell three yards.

The Bengals have rarely been an easy team for the Steelers to run on, when you look at it from a play-to-play basis. There are games, like on Sunday, when they will hit on a few longer runs and skew the overall numbers, but many runs in between are unsuccessful, and we also saw, both this week, and in some of the examples above.