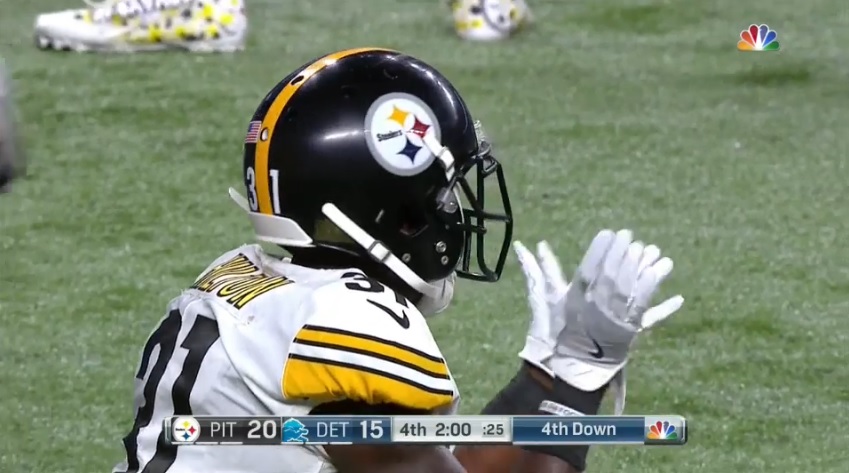 Mike Hilton’s strong season continues, a topic we broach pretty much on a weekly basis. He’s become the full-time starting slot corner and done about as well a job as you could hope for in coverage. That continued in Sunday’s win over the Detroit Lions.

But his impact in the run game has arguably been just as impressive. Carnell Lake has compared playing in the slot to playing strong safety because of their run fit responsibility and importance. Hilton has excelled as much there as he has in coverage and it showed up again Sunday. He recorded two tackles against the run, giving him nine on the season, easily the most of any corner (the next closest has four).

Today, we’re going to take a quick look at both of those.

The first comes on 3rd and 16. Where you know a draw is a possibility, but still, as a corner, most are focused on the pass. Not Hilton. Beats the slot corner to the inside on the draw and makes the tackle on the back for just a two yard gain. Forces a long field goal for kicker Matt Prater.

The second was even bigger. The Lions’ final drive. 3rd and goal. Lions surprise with another run but Hilton isnt’ fooled. Comes flying in off the edge, fits his gap, and is the first to make the tackle. Forces 4th down, which Detroit fails to convert.

Hilton’s physicality has always been one of the top things that’s stuck about his game. He isn’t athletically gifted. He clearly isn’t a big guy. He admits he’s easy to overlook. But when he straps on a helmet, and is coming downhill to play the run, he’s one of the most effective in the league. That’s been huge for the Steelers in a world where nickel is the dominant package.