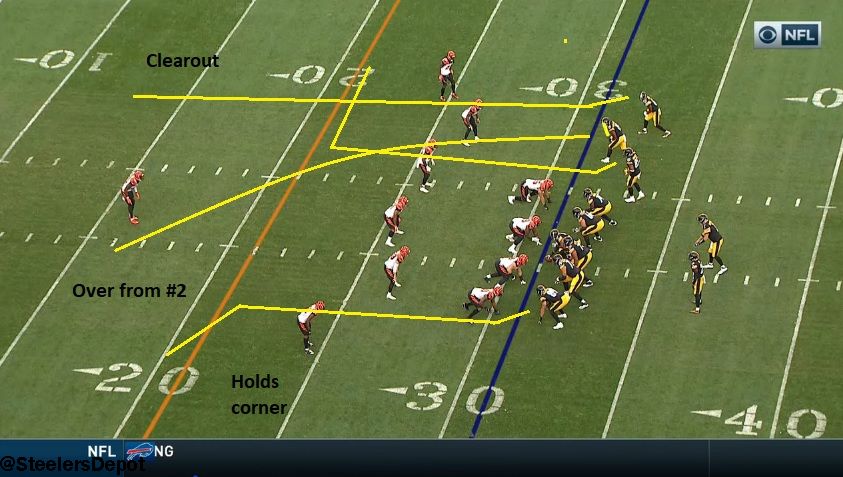 With Sunday’s touchdown, JuJu Smith-Schuster became the first sub-21 year old to haul in three touchdowns. And it was his easiest of the year, wide open down the left side for a 31 yard, walk-in score. At first glance, it’s surprising to see the Cincinnati Bengals blow a coverage that badly. Look a little closer and you might realize it shouldn’t.

The same thing happened only a year ago.

Week Four, 2016, primetime football against the Kansas City Chiefs. Ben Roethlisberger hits a wide open Darrius Heyward-Bey from 30 yards out. Another walk-in touchdown. Yup, you guessed it, it was the same play. We’ll break down what happened Sunday and then flashback to a year ago.

Steelers line up 3×1 out of 12 personnel with a TE “nub” backside, meaning there’s no receiver there. The backside TE runs an out route to hold the backside corner. To the front side, the three receiver side, #2 (JuJu) runs an over route across the field. If no one matches him, he’s open, because the CB is suckered in by the out route. Here’s the play drawn up.

And here’s the execution. Great path by Smith-Schuster to sift through the trash and work under the linebacker and then back over top without getting bumped off.

Bengals play with a single high safety. That’s where Roethlisberger comes in. Does a tremendous job to look right to move the deep safety away from where #2 (JuJu), is working to. With the safety out of the way, and the corner held by the tight end, Roethlisberger effortlessly moves back to his left to find a wide open rookie. Touchdown. 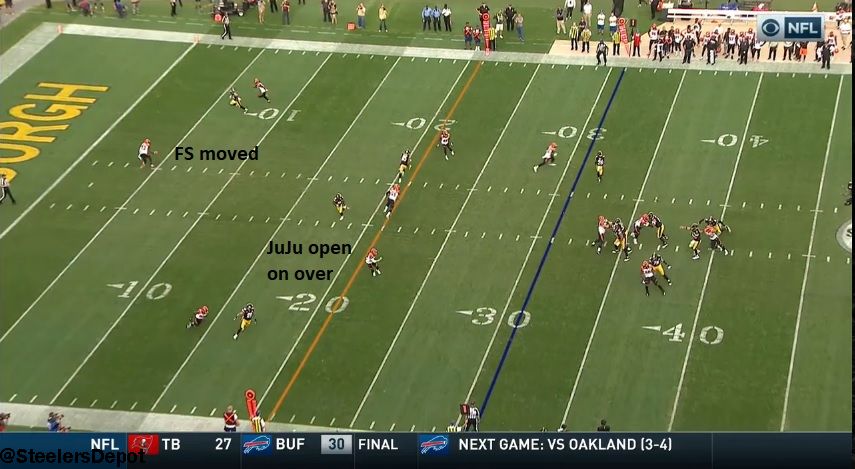 And here’s the whole thing.

Let’s look at last year. It’s out of 11 personnel, with a couple different route combinations underneath but the core concepts are identical. Backside TE (the nub), runs an out route to hold the CB. This time, it’s #3 running the over route. And you get the vertical shot to the three receiver side. It’s versus single high, the safety gets moved, and the over route is wide open.

Love the playcall from Todd Haley. Plays you keep in your back pocket when you need them most. And it worked 100% as intended.