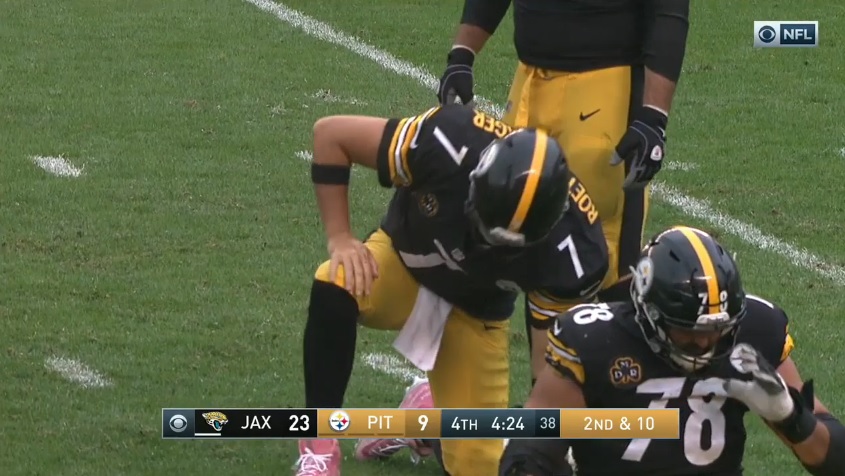 “Everything that could leak, burn, snap or rupture did so with the regularity of the Anvil Chorus. The collected service advisories would look like the Gutenberg Bible.”

That was how Time Magazine reviewed the 1984 Maserati Biturbo, including it on their list one of the 50 worst cars ever produced.

And that’s how you could describe Ben Roethlisberger’s performance yesterday. Heck, the whole season. But yesterday reached its zenith. Five interceptions, the most of his career. A pair of pick six’s, only the second time that’s happened to him. In a year where expectations were as high as ever, the offense continues to falter in spectacularly frustrating fashion.

We know the symptoms. The interceptions, bad reads, locking onto his primary target. But the cure, the underlying cause? I don’t have a clue. And I don’t think the Steelers do either.

It’s not as if Roethlisberger has fallen apart physically. The big arm he’s had since breaking into the league is still there. The 49 yard pass to Antonio Brown on yesterday’s first play was beautiful and in camp, he made those plays with both regularity and ease. There was no Robert Griffin major injury that sapped mobility in an instant. There wasn’t even a Johnny Manziel problem, floating on a flamingo as his proverbial white flag.

Weirdly, the issue with him seems to be on the mental side, the last thing you would think would be an issue with a 35 year old QB closing in on 200 career starts.

Post-game, Roethlisberger didn’t offer much of an explanation.

“I’m not playing well enough,” was his go-to line throughout his six minute interview with the media. Irritation was high, solutions low.

Truthfully, there wasn’t one.

Except that this could be a sign of the end of Roethlisberger’s career. I’m not calling the time of death, Roethlisberger has always seemed to work best when flying under the radar, but it’s become much more than a whisper among Steelers’ fans. It’s a shout, a scream, and the hot topic among the media.

If the issue was something physical, it could be fixed or schemed around by Todd Haley. But when it’s beyond that, the solution is much more fleeting. The playbook shouldn’t have to be scaled back like Ben is a rookie. He’s Roethlisberger, not Dennis Dixon.

AC/DC has never had to play Hot Cross Buns to figure things out. Ben shouldn’t have to be spoon fed, either.

Do you eliminate the deep shots entirely? Maybe but then you ask this offense to sustain 10 play drives, something they haven’t shown capable of. Or do you emphasize the deep ball, which is still one of the poorest in the league.

Where does the offense go from here? Up, I suppose, if only because they’re scraping the bottom of the barrel. But will it come close to expectations or the level it has to be to make this team competitive? It’s difficult to be optimistic. The answer relies on Ben Roethlisberger. The offense, and the Steelers, will go as far as he does. And as it stands today, it feels like both are being shown the door.