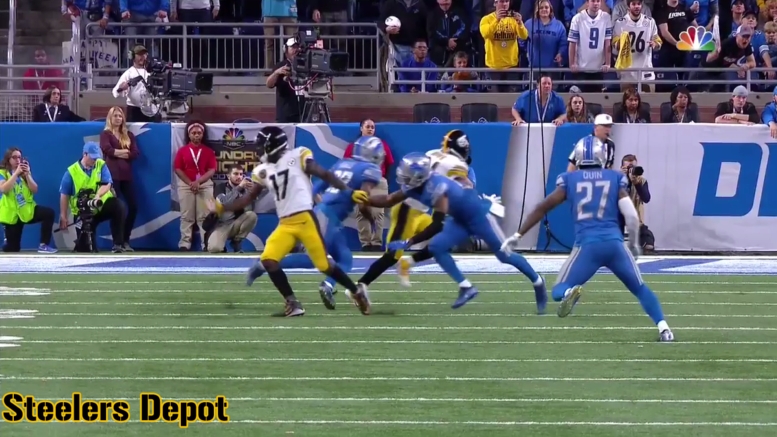 Eli Rogers certainly had a pretty significant impact on Sunday’s game for a player who did not officially record a statistic. The Pittsburgh Steelers third-year wide receiver did officially have one target, and a second that was nullified by a penalty. He did not catch either pass, but both plays were big moments in the game.

The first instance occurred on the Steelers’ first drive, ending it on a sour note; the second came on their final drive, and helped write a fitting conclusion for the game.

The offense marched down the field pretty smoothly on their openly drive in Detroit, getting into the red zone with relative ease. If I recall correctly, they did not even face a third-down situation until then. But that is when Rogers showed up.

On third and two from the Lions’ 16-yard line, the Louisville product was able to get great separation running a corner route out of the right slot to the short side of the field. Quarterback Ben Roethlisberger delivered him the ball right in his window, but he dropped it.

For a player who had already spent two games earlier this year on the bench because of his struggles—manifesting both on offense and special teams—that was a big blunder, and he knew it, grabbing his helmet after the drop as if he knew he blew his one and only chance.

But when you are playing with Roethlisberger, very rarely is that going to be your only chance if you are a contributor of any significant note. In fact, he pretty frequently makes it a point of going right back to a player who has made a mistake to show that he still trusts him and to give him the chance to make up for the error.

That didn’t happen to be the case for Rogers in this game, but Roethlisberger did come back his way in one of the biggest moments of the game, deep into the fourth quarter and the Steelers trying to hold on to a victory that they just couldn’t seem to put way for good.

After the defense was able to stand tall and prevent a go-ahead score from their own eight-yard line on fourth down, the offense took over. They picked up four yards on first down. Roethlisberger threw incomplete on second down. Suddenly it was third and six from the 12-yard line and 1:45 to play.

Enter Rogers, who again came out of the right slot, this time trying to run an out route against Darius Slay, the Lions’ top cornerback.

Only he couldn’t gain separation…because Slay was literally holding his hand. The television audience at first merely saw him stumbling in the direction of a pass sailing away from him, relieved only when the late flag finally came in.

It was a defensive pass interference penalty, an automatic first down, and helped set the table for the offense to be able to close out the game, sealing the Steelers’ third victory in a row.