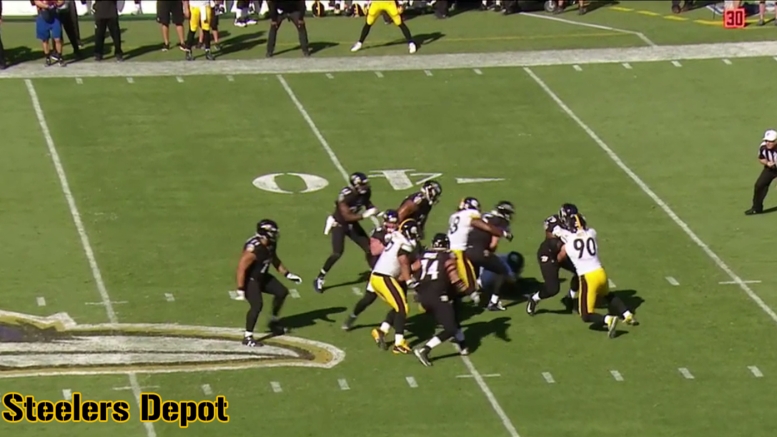 Last week in Chicago, the Pittsburgh Steelers defense was able to make a couple of splash plays, but it was the ones that they failed to pounce on late in the game that stuck with them, as it helped contribute to their overtime loss to the Bears, their first loss of the season, and first of the regular season since Week 10 of last year.

They did not squander those opportunities in Baltimore yesterday, sealing the game with two interceptions in the fourth quarter, after having already recovered a fumble earlier in the game, for three takeaways in total.

They used those takeaways to turn short fields into two touchdowns, in the middle of the second quarter and then later in the fourth.

In the second, on first down from the Ravens’ 32, Alex Collins was strung out to the left from pressure by Ryan Shazier, which allowed the defense to swarm around the ball carrier. In game Cameron Heyward, who knocked the ball out of the back’s hands, ending up recovering it on his own.

With the recovery, the offense took over at the 28-yard line, and despite ending up with second and 15 quickly, they rebounded with an 18-yard catch by Jesse James. Four plays later, after a third-and-two conversion from Le’Veon Bell, the running back punched it in for the first touchdown of the game and a 13-0 lead.

Late in the game, Shazier picked off one pass that the offense failed to capitalize on, but it did flip the field, and that helped put the Ravens in poor field position on their second drive…on which Shazier was the catalyst for another interception, this by Mike Hilton, that put the offense near midfield.

And this time, they did make good on it during a seven-play drive that featured six carries from Bell, only broken up by one pass because the Ravens jumping offside gave them a free play. That pass put the ball on the one yard line, and they scored on the next play.

And in between and amidst all of those turnovers, the Steelers defense also managed to put Joe Flacco on his back four times, the most sacks they have recorded since the first game of the season when they got to rookie DeShone Kizer seven times.

Leading the way was the captain, Cameron Heyward, who notched two sacks, one the first one taking advantage of a bad snap that forced Flacco to recover it and try to roll out to his left. Mike Hilton also recorded the second sack from a member of the secondary.

Bud Dupree and Stephon Tuitt split the final sack late in the game, giving the defense 15 on the season. They now have the second-most sacks (as of this writing behind the Jaguars, who have gotten off to 18 of them already, which included 10 in the opener. They have eight in their last three, the same as Pittsburgh.