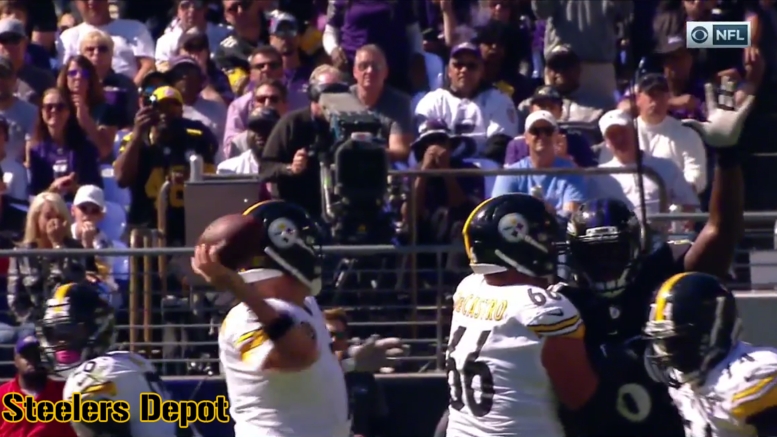 As I alluded to a couple of weeks earlier, I am on Saturday going to introduce my first of a quarterly installment in which I intend to look at the passes thrown by the Pittsburgh Steelers’ quarterbacks this season—hopefully always Ben Roethlisberger—that should be deemed worthy of producing a turnover.

But prior to that, I think it would only be fair to also take a look at some of the numbers that stand on the opposite end of the spectrum. Incomplete passes, for example, that were either not the quarterback’s fault, not intended as a completion (thrown away), or otherwise unable to be aimed (as in batted balls at the line).

I have endeavored to try to monitor some of these things in my charting starting with this season, which has admittedly been somewhat trial and error in terms of its execution, but I think it will help to provide some additional context to the traditional numbers that we have seen and give us a closer approximation of the accuracy of the throws.

But I can bring some things to light. Officially, Roethlisberger is credited with attempting 140 passes on the season, with 87 of them being completed passes, meaning that he has thrown 53 passes, officially, that were incomplete.

What those numbers don’t indicate is the fact that four of his incomplete passes were definite snaps on which he was only throwing the ball away. This does not include, for example, a pass in the end zone to Jesse James in the season opener that at least gave the receiver a chance at making a play, but which was otherwise intended to put the ball out of harm’s way.

Roethlisberger has also had three passes so far batted at the line of scrimmage, including two of them on Sunday by Willie Henry of the Ravens. Combined, those unaimed passes account for seven of his incomplete passes, so on aimed passes, he has actually completed 87 of 133.

And six of his aimed passes were throws that in my determination were dropped. Martavis Bryant leads the team with two drops, but Le’Veon Bell, JuJu Smith-Schuster, Vance McDonald, and Antonio Brown all also have one drop. I know that Pro Football Focus says that Brown has not dropped a pass—I disagree. It came with 5:26 to play in the second quarter against the Vikings.

In addition to the drops, Roethlisberger was also accurate on at least three additional passes that ended up being broken up because of contact from a defender that otherwise likely would have been caught. These targets were McDonald, Brown, and Eli Rogers.

If we want to look purely at the accuracy of Roethlisberger’s aimed passes this season, then, taking into consideration throwaways, batted passes, drops, and accurate balls broken up by hits from defenders, then we are actually looking at 98 accurate passes on 133 pass attempts, for an accuracy rating of 73.7 percent.