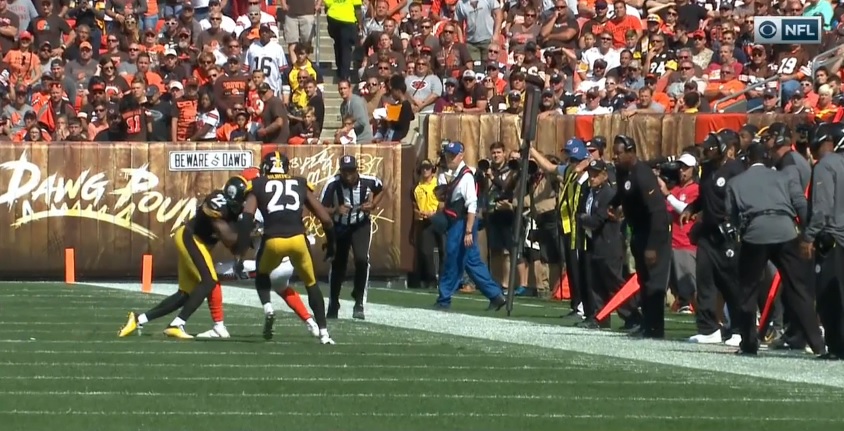 It wasn’t about the call. It was all about the timing. That’s why Mike Tomlin said he was, in his words, “irate,” after the refs flagged William Gay for unnecessary roughness on 3rd and 18, keeping a crucial drive alive.

Tomlin agreed that the refs seemed to make the call after watching the replay on the Jumbotron.

“That’s why I was irate,” Tomlin told reporters. “I’m a big player safety guy. Obviously, I’m on the competition committee. So very rarely you’re going to hear arguments from me regarding calls relative to that. Provided they’re done in real time. I thought they called it off the Jumbotron and I won’t accept that. ”

By my rough estimate, it took officials more than 20 seconds following the hit to throw the flag, issuing it after the replay.

As is usually the case, the refs didn’t offer much of an explanation. And Tomlin’s “bad cop” approach, he admits, probably didn’t help matters.

“You don’t often times get legitimate explanations when you’re asking some of those questions. Maybe some of the time it has to do with the nature of how I ask the question. I need to be more politically correct if I want an answer in some of those instances.”

While it was clearly the correct call, Gay made contact with the receiver’s helmet, the process was certainly flawed and Tomlin’s anger understandable. The Cleveland Browns kept their drive alive and marched down the field until T.J. Watt picked off DeShone Kizer, one of the pivotal plays of the game. We’ll have a film review of that play tomorrow morning.

Despite all that, Tomlin stands by the player safety rules and said he sees no reason to change them.

“The onus is on the defender as it should be. That guy is in a defenseless position. He’s attempting to catch the football. In the essence of player safety, we’re going to be unwavering in our approach to that…even though some of those plays are somewhat debatable, we have no intentions of taking a step back in terms of improving the safety of those who play the game.”

The Steelers will need to cut down on the 13 penalties they racked up Sunday, the most they’ve had in an opener since 2002, to beat a good-looking Minnesota Vikings team and begin the year 2-0.