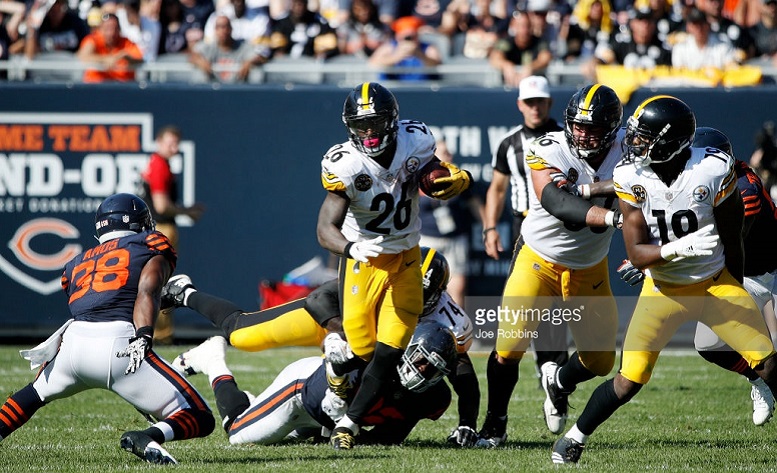 The Pittsburgh Steelers offense certainly hasn’t found their legs so far this season and especially when it comes to their ability to run the football well on a consistent basis in their first three games of the 2017 regular season. Because of that, Steelers head coach Mike Tomlin was asked during his Tuesday press conference to pinpoint exactly what is wrong with his team’s offensive running game three games into the season.

“From my perception, nothing,” said Tomlin. “Last week, I think we had acceptable yards per carry, 4.1, or whatever, if you look at Le’Veon’s numbers. Our issue last week was simply volume of runs and I outlined it when I outlined the game. When we muffed that punt, we lost a possession in the first half. We gave them a possession. As you go in at halftime after the blocked kick, you’re down by 10 and you’re playing with 30 minutes. You worry about balance as time becomes a factor and you play catch-up football.

“We simply just didn’t run enough because of circumstances that had nothing to do with the run. We got behind in the football game, you’re going to lose your balance when you do that. They [Chicago] possessed the ball because they were able to run the ball. We lost time of possession because they possessed the ball. None of those things have anything directly to do with the run game. The only issue I feel like we had with our run game in the last game was volume, or lack thereof.”

Steelers running back Le’Veon Bell only carried the football 15 times in total against the Bears for 61 yards and a touchdown. However, his 4.1 yard per carry average in that game was his best of the season. Additionally, 7 of Bell’s 15 rushes can be viewed as successful runs and if that’s not enough, he had two other runs during Sunday’s game that totaled 16 yards wiped out by penalties.

The Steelers will play a Baltimore Ravens defense in Week 4 that surrendered 166 yards rushing to the Jacksonville Jaguars in Week 3 in a game that was played in London, England. Additionally, the Ravens lost starting defensive end Brent Urban for an extended amount of time on Sunday due to an injury. If ever there were a game to have a higher volume of rushing attempts by Bell, Sunday’s contest against Baltimore might be it.