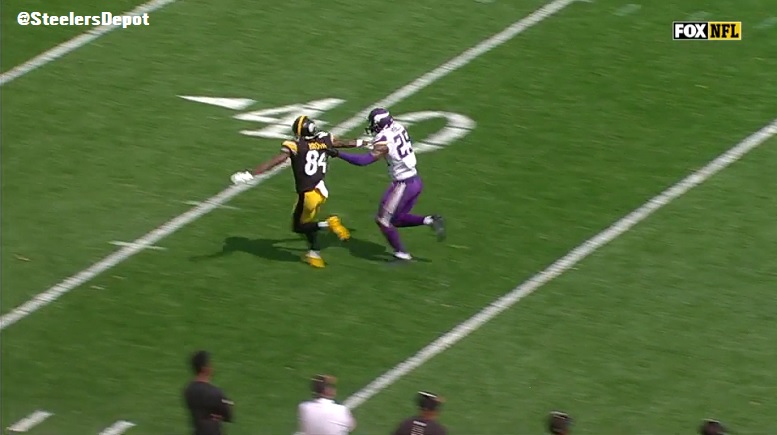 As many who follow the NFL closely already know, explosive plays are a huge element of every game in addition to turnovers. In the Pittsburgh Steelers Sunday win over the Minnesota Vikings, the team’s offense only registered three explosive plays on paper. With that said, one can’t discount the two pass interference penalties that were called on the Vikings defense that resulted in explosive yardage gains of 22 and 49 yards. Additionally, the Steelers offense also registered a gain of 41-yards in their Week 1 win over the Cleveland Browns thanks to a pass interference penalty

On Tuesday, Steelers head coach Mike Tomlin was very curiously asked if he’s concerned right now that the team’s offense is having to rely heavily on defensive pass interference penalties so far this season.

“To say that you’re relying on defensive penalties, splash plays were not produced because of those defensive penalties,” Tomlin replied. “When 10 [Martavis Bryant] is running behind somebody, if you dont jump on his back, he’s going to catch it and score. So, you can frame it in whatever way you want to frame it. The reality is, we’ve been in third and long some. In Week 1, we were in third and long some because of the penalties. That was the case some this week, but less so.”

In Week 1, Steelers quarterback Ben Roethlisberger threw deep a total of five times, including penalty plays, and that resulted in several fans of the team wondering why more shots weren’t taken. On Sunday against the Vikings, Roethlisberger threw deep a total of 10 times and that resulted in some fans wondering if that was too much. On Tuesday, Tomlin was asked if those double-digit deep pass attempts against the Vikings were part of the game plan, or just a result of what the defense was inviting due to some alignments they showed.

“It’s always both,” Tomlin said. “We’re not going to allow you to play on the line of scrimmage and not stretch you. We’re not going to allow you to play man-to-man and not stretch you. We want you to defend the entire field, both vertically and horizontally, and that’s our mentality. But it was also coupled with the techniques that they employed. They’ve [the Vikings] got top-flight, first-round corners, high pedigree guys, guys that have big contracts, so, the game unfolded in the ways that it unfolded.”

During his Tuesday morning interview on 93.7 The Fan, Roethlisberger was also asked if all Sunday’s deep shots were part of the plan or a result of the way the Vikings defense was playing at times.

‘Its kind of their double-edged sword,” Roethlisberger said of the Vikings defense. “Their secondary plays very tight, their safeties are down, they entice you to throw the deep ball. But to throw the deep ball, you’ve got to be able to sit in the pocket for a little bit longer than normal. You know the ball’s not coming out quick, so they count on their pass rush to get there and it was creating pressure.

“There was a couple of sacks, but even on top of that, there were some hurried throws. I had to hurry some throws and that’s just because they were creating issues in the pocket. And so they kind of give you the deep ball if you can block it.”

Through two games, Roethlisberger’s passing stats might not look great on paper to many as he has officially has 506 yards passing on 71 total attempts. However, if you were to add in the 112 in defensive pass interference yardage that came courtesy of Roethlisberger throwing deep in the first two games, his total passing yardage on the season jumps to 618, an average of 309 per game.

“That’s a very very good defense that we went against,” Roethlisberger said of the Vikings. “If you look at the stats, which you know me, I’m not really a big stat-guy at all, but you look at maybe the numbers weren’t there and whatever. But you look at, I think there were three plays that were big plays in the game that wouldn’t go on the stat sheet. And they were a pass interference on A.B. [Antonio Brown] for like 40 yards, a 50 or 60 yard pass interference on Martavis Bryant, we got a free play, deep ball down the field to Martavis. I mean, there were some really big plays in the game that I think defensive guys say, ‘Hey, listen, I’m just going to tackle the guy, because I’m not going to give up a touchdown.’ And those are big plays for an offense that if they go in the offenses’ stats, then all of a sudden your stats look better, or whatever. But winning the game is all that mattered.”