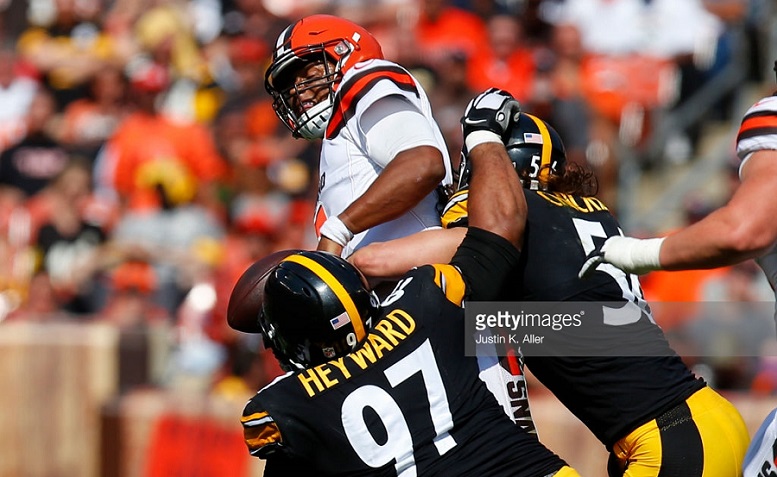 The Pittsburgh Steelers didn’t have starting outside linebacker Bud Dupree for their 2017 regular season opener against the Cleveland Browns as he sat out the game with a listed shoulder injury. In addition to Dupree missing the game, starting defensive end Stephon Tuitt exited Sunday’s contest against the Browns with a right bicep injury after just two plays.

The loss of those two left side defensive players resulted in outside linebacker Anthony Chickillo and defensive end Tyson Alualu both needing to play a large amount of snaps and during his Tuesday press conference, head coach Mike Tomlin was asked to access the performance of the two.

“Those guys did a great job, but I’m not surprised by it,” Tomlin said of the Sunday play of both Chickillo and Alualu. “Bud [Dupree] missed significant time in the preseason and so that wasn’t Chickillo’s first time to run with the first group. The same can be said with Tyson. Pleased with their performance, not surprised by it.”

Chickillo, who started in place of Dupree on the left side, had a great game from a statistical standpoint as the former sixth-round draft pick out of Miami registered two sacks and six total tackles against the Browns. If that’s not enough, Chickillo also scored the Steelers first points of the game thanks to him recovering a blocked punt in the end zone early in the first quarter.

As for Alualu, who the Steelers signed to a two-year free agent contract this past March, he also seemingly played well against the Browns. The former first-round draft pick of the Jacksonville Jaguars recorded five total tackles against the Browns in the 54 total defensive snaps that he played.

With Tuitt now week-to-week with his bicep injury, it stands to reason that Alualu could see extended playing time moving forward. The same could go for Chickillo as Tomlin was very sketchy Tuesday when asked about the current health of Dupree, who is also reportedly dealing with an ankle injury.

The Steelers will release their first injury report of Week 2 on Wednesday so we’ll have to wait and see if Dupree and Tuitt are both able to practice in some capacity.