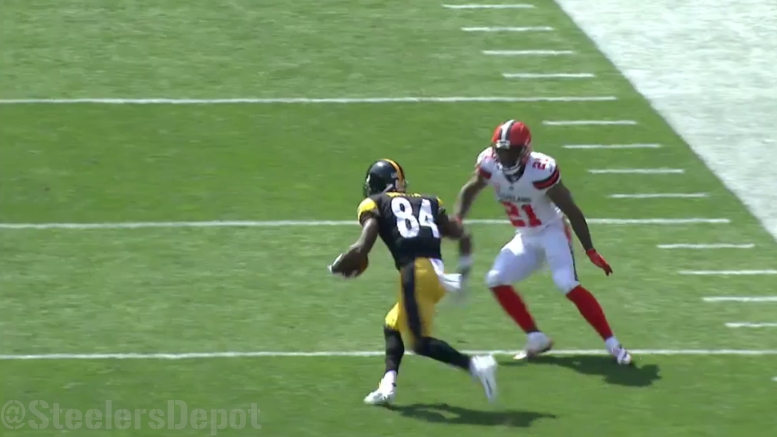 Earlier in the offseason, Carnell Lake remarked Antonio Brown looked even better than before. And his offensive coordinator agrees.

“I haven’t seen anybody who does what he does,” Haley told Labriola. “And I think Carnell is right on. You see more burst, you see even better play speed.”

Brown is the league leader in yards through two weeks with 244, well ahead of second place. And his 16 receptions are just one back from the league lead and the most of any wide receiver. Jason Witten’s 17 paces the group.

As Haley usually circles back to when talking about AB, he praised Brown for his work ethic, saying he “outworks everybody” and “I’ve learned not to put limits on that guy.”

Brown’s speed is certainly one thing he’s noticeably improved throughout his career. He ran a 4.57 at the NFL Combine in 2010 but last May, posted clips of him running 4.35, which would make him one of the fastest receivers in the league. He probably isn’t at quite that speed but either way, he’s still plenty fast. Brown has also spent his career gaining weight. Entering the league at 186 pounds, he’s now in the 195 range, making him an even harder target to take down in the open field.

Haley stopped short of saying he’s the best receiver he’s ever coached, probably to avoid slighting anyone in his past.

“I have been around some great ones. A couple that will probably end up in the Hall of Fame. AB, I know, is trying to be the best there is. I’m happy to be apart of it.”

With 2 catches on Sunday, #Steelers WR @AB84 will reach 650 receptions in 104 games to set an NFL record for the fewest games to the mark: pic.twitter.com/nIRAORslvC

Best in the game? You better believe it?

Best ever? It’s not impossible.