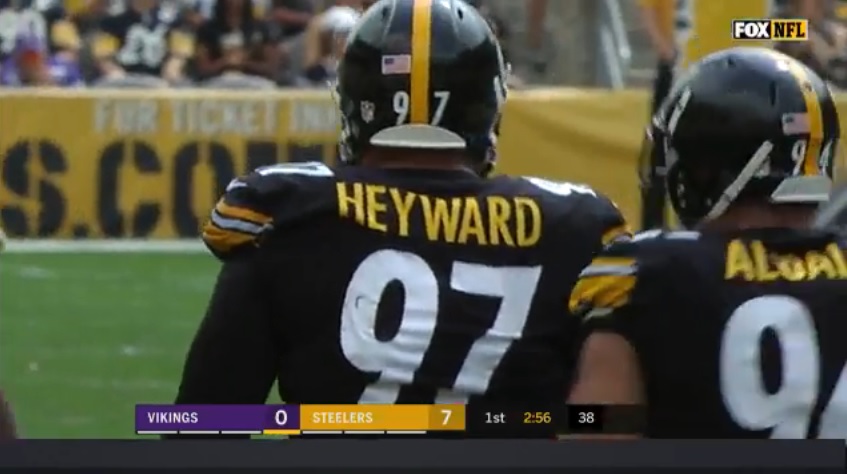 On the day the Pittsburgh Steelers honored the late, great Dan Rooney, the Steelers grinded out a 26-9 win over the visiting Minnesota Vikings on a warm day in Pittsburgh.

For the second straight week, the offense looked messy at times, but it was the defense that stood tall again, holding the Vikings to just 237 total yards in the game.

Like I do each week, I’ll take a shot at grading each position group’s performances from the game.

For the second straight week, Ben Roethlisberger wasn’t great, be he was good enough to lead the Steelers to the win, this time at home.

Against the Vikings, Roethlisberger was constantly under pressure from a Minnesota front seven that gave the Steelers’ offensive line all they could handle. But what was weird from Roethlisberger on Sunday was the constant need to go deep hoping to take the top off the Vikings’ secondary.

On the day, Roethlisberger completed just one deep shot — a 51-yarder to Martavis Bryant — and drew a pass interference calls against Antonio Brown and Bryant, but overall Roethlisberger’s propensity to take deep shots didn’t pay off as well as he was hoping.

It was a heavy dose of Le’Veon Bell during Sunday’s game against the Vikings, and for the first time this season Bell looked sort of like himself.

No, he didn’t have any explosive plays, but he was a key part of the Steelers establishing some balance offensively, which allowed the Steelers to eat a lot of clock, tiring out a stout Minnesota defense in warm temperatures at Heinz Field.

While he wasn’t a threat through the air, Bell picked up consistent tough yards for the Steelers on the ground, and it was nice to see.

One week after being mostly a non-factor, Bryant looked like the old Marty B on Sunday, getting deep twice — one for a 51-yard catch and another for a long pass interference penalty on the Vikings, providing a boost for the Steelers’ offense on the day.

Bryant also found the end zone against the Vikings in the first quarter, beating Terence Newman on a slant for a 27-yard touchdown, scoring for the first time in a year and a half.

Outside of Bryant, Antonio Brown was mostly shut down by Xavier Rhodes, hauling in just five catches for 62 yards on the day. Brown did have a 26-yard catch-and-run in the fourth quarter, but for the most part he was kept quieter than normal.

Fortunately, that wasn’t much of a big deal for the Steelers’ offense as rookie JuJu Smith-Schuster scored on his first career touch in the NFL, taking a shovel pass in from 4 yards out. Smith-Schuster finished with three catches for 16 yards on the day, but he had a drop on a screen pass and was called for a false start penalty, which happened to be his third penalty on the year.

Not much to write home about here with the tight ends group one week after a breakout performance by Jesse James in the red zone.

With no Vance McDonald available due to a back injury, it was just James and Xavier Grimble at tight end. The duo didn’t combine to do much, as James led the way with all four catches and 27 yards in the win.

James did do a nice job run blocking for Bell, but he did give up a big sack to Danielle Hunter, which was a mistake asking him to block a guy one on one, who with 12.5 sacks last season.

On the ground, the Steelers’ offensive line did a nice job taking it to a great front seven of Minnesota, allowing the Steelers to chew up a ton of clock in the second half as Pittsburgh rushed for 102 total yards on 32 carries in the win over the Vikings.

Outside of running the ball, pass protection simply wasn’t good enough for much of the game, namely from Alejandro Villanueva, who struggled mightily against Everson Griffen until leaving due to heat-related illness.

Ramon Foster, Maurkice Pouncey and David DeCastro did a nice job keeping Ted Johnson and Linval Joseph at bay along the interior, while Marcus Gilbert more than held his own against Danielle Hunter on the right edge before leaving with an injury.

Chris Hubbard came in for Villanueva in the second half and did an okay job, which is what you’re hoping for from your backup swing tackle, but the Steelers gave up four hits and two sacks on Roethlisberger.

For a unit that is supposed to be one of the best in the league, the first two weeks aren’t entirely encouraging overall.

Cam Heyward had arguably the best game of his career on Sunday against the Vikings, living in the backfield for much of the game while also flying all over the field to make plays.

Without his partner in crime in Stephon Tuitt, Heyward was a man on a mission, recording six tackles, two tackles for loss and one quarterback hit while supplying a ton of pressure up the middle.

Tyson Alualu finished with three tackles and one quarterback hit in the win, continuing his strong start to the season in place of Tuitt, while Javon Hargrave was stout against the run despite not recording a stop on the day.

Another week, another strong showing by the Steelers’ linebacking corps, this time against a Vikings offense that was great in Week 1.

Against Minnesota, Ryan Shazier led the way with eight stops and nearly had an interception late in the fourth quarter, while Vince Williams recorded his first sack of the season, adding four stops and one quarterback hit in the win.

Backup inside linebacker Tyler Matakevich made a great play on a fake punt by the Vikings, reading his keys and covering the receiver on the trick play to bat the ball away, setting up the Steelers in great field position.

At outside linebacker, Bud Dupree made his return and was a factor immediately, recording a sack on Case Keenum while adding two run stops and one pass deflection in the win.

TJ Watt was terrific early in the game, battling down a screen pass and adding two run stops before exiting the game with a groin injury. Stepping in for Watt, backup linebacker Anthony Chickillo picked up where he left off last weekend, recording five stops and one quarterback hit.

As a unit, the Steelers’ secondary held Keenum and the Vikings to just 167 passing yards, which was well below their 360+ from last week against New Orleans.

Mike Hilton was arguably the best defensive player for the Steelers not named Cam Heyward as the slot corner recorded a team-high nine stops, one big quarterback hit in the first quarter and provided some great coverage on the day.

Joe Haden looked a lot better in his second career game with the Steelers, but the veteran did give up a 24-yard catch to Adam Thielen on a crossing route in the first half.

Artie Burns was good for the most part, recording three tackles, one tackle for loss blowing up a screen play and deflecting one pass, but the second-year corner continues to have issues with penalties, getting hit with two pass interference calls in the win.  The Miami (Fl.) product did add a fumble recovery late, sealing the win completely.

At safety, Mike Mitchell had a big hit to break up a would-be first-down catch by Kyle Rudolph in the first half, but the veteran didn’t drop far enough in the second half, giving up a 27-yard one-handed catch to Rudolph over the middle on 3rd and 20. Not his fault entirely though, because Mitchell isn’t used to playing the shallow zone in the middle of the field.

Mitchell did miss an open field tackle on Dalvin Cook’s near-touchdown in the third quarter, but for the most part he was solid.

Sean Davis had a nice game as well, recording eight stops in the win, including a touchdown-saving stop on Cook’s long run as mentioned above.

Chris Boswell, have a game!

The Steelers’ kicker was a perfect 4-for-4 on the day, but he was fortunate to have a miss wiped out by a Minnesota penalty.  With the Steelers continuing to struggle for the most part finishing off drives, Boswell continues to come through in the clutch for Pittsburgh.

Punter Jordan Berry had a decent day, punting five times for 193 yards (38.6 yards per punt), one of which was woefully short. However, Berry pinned the Vikings within their own 20-yard line twice on the day, including a masterful punt downed at the 1-yard line by rookie Brian Allen, forcing the Vikings to try and drive out from the shadow of their own end zone.