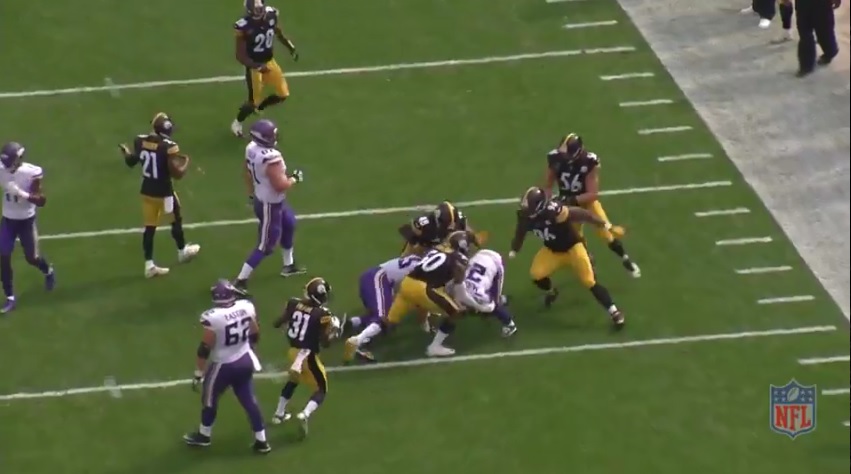 In a big Week 2 matchup at Heinz Field Sunday afternoon against the visiting Minnesota Vikings, the Pittsburgh Steelers’ defense stood tall once again, shutting down a high-powered attack despite Case Keenum filling in for an injured Sam Bradford.

Against the Vikings, the tackling was much improved from a Week 1 showing in Cleveland where the Steelers’ defense missed 15 tackles.

As I did last week following the win over the Browns, I’ll break down the Steelers’ missed tackles below.

Five missed tackles against the Vikings on Sunday is spectacular, considering how slippery rookie running back Dalvin Cook has been to start his NFL career, as well as the ability to make plays in the passing game for Stefon Diggs and Adam Thielen.

In fact, the Steelers didn’t miss a single tackle Sunday in the first half, allowing them to take a 14-3 lead into the half with the offense holding the ball for much of the first half.

In the second half, Pittsburgh obviously missed five tackles, but they weren’t really egregious misses outside of Mike Mitchell’s, which nearly led directly to a Cook touchdown before being overturned following a review.

Overall, I felt that the Steelers defense was excellent in the tackling category, forcing the Vikings’ offense off the field repeatedly, giving the ball right back to an offense that moved the ball well against a strong Minnesota defense.

Let’s take a look at the missed tackles from Sunday’s win.

Early in the third quarter, Cook gets a carry near midfield as the Vikings continued to try and keep the offense balanced with Keenum under center.

At the snap, Tyson Alualu beats Nick Easton to get a clean look at Cook, but the Minnesota running back uses angles well, cutting to his right to use the downed Easton as a sort-of-block, not allowing Alualu to get a great look at him.

After Alualu gets a hand on Cook, Vince Williams is able to work off a block to get a shot at Cook. Unfortunately for Williams, he slides off of the tackle once Mitchell comes flying up from the secondary for the tackle.

It’s an unfortunate missed tackle for Williams because he was in good position, but it goes down as one on the stats sheet.

On just one play for 10 yards, 40 percent of the Steelers’ missed tackles from Sunday occurred. I’ll take that all day long.

Outside of the missed tackles by Alualu and Williams above, Mitchell comes up with a missed tackle in the open field on the same drive.

You’ve all seen the run by Cook that nearly went for a touchdown, but I’ll show it to you here again.

Outside of the lost containment from Williams, Sean Davis and Joe Haden on this play, Mitchell is the last line of defense on the run and has to make this stop in the open field.

I’d like to see him take a better angle towards Cook, and I’d like to see the veteran safety use the sideline to his advantage. By taking a sloppy angle after shooting forward, he allows enough room to his inside to let Cook cut back in towards the hash marks, forcing a flailing attempt from Mitchell in the open field.

One play later, the Vikings scored. Who knows what happens if Mitchell makes that stop at the 9-yard line.

And finally, to the last two missed tackles, we go to a similar play the Browns used in Week 1 to force a missed tackle from Haden.

On a swing pass to the short right flat to Jerick McKinnon, the Vikings are banking on the scat back to make some defenders miss in the open field.

Although the play went for no gain, the play design sort of work for Minnesota as McKinnon forced Ryan Shazier and Mike Hilton to miss behind the line of scrimmage.

Shazier does a great job of dissecting the play, shooting past would-be blockers for an unimpeded shot at McKinnon, but as per usual from the Ohio State product, he comes in out of control and uses poor technique in the open field, allowing McKinnon to elude him.

After Shazier misses, Hilton — who led the Steelers in tackles on Sunday — had the next shot. He misses as well, ducking his head and diving at ankles. Fortunately for Shazier and Hilton, each missed tackle attempt slows down the speedy McKinnon, allowing guys like Bud Dupree and LT Walton to rally to the football near the Steelers’ sideline, shutting down a possible big play.

As I said earlier, I was very pleased with the tackling display put on by the Steelers on Sunday. Five is the lowest number in a game I’ve seen from the Steelers since I started tracking the misses two seasons ago for Depot.

If the defense can continue to play at a high level and improve in the tackling department like they did from Week 1 to Week 2, the Steelers could be in serious business when it comes to Super Bowl contention.