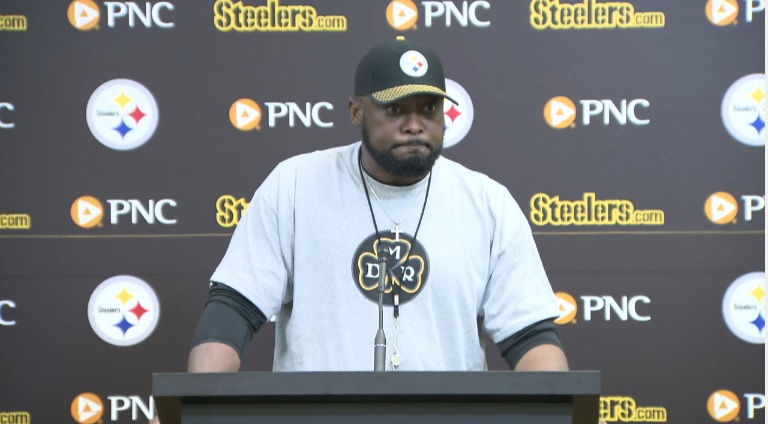 The Pittsburgh Steelers lost Sunday to the Chicago Bears on the road and after the game was over, head coach Mike Tomlin had quite a bit to say during his talk with the media not only about what happened during the contest, but also about that happened prior to the game when his team chose not to be on the field for the National Anthem.

Below is a transcript of Tomlin’s post game press conference in its entirety:

Tomlin Opening Statement: I’ve got a disappointed group in there and appropriately so. We fought our tails off, but wasn’t able to finish to finish the job. Faced a lot of adversity today, but most of it created by us. in the first half. I thought that we turned the ball over, you’re minus two in the first half, plus a blocked kick. You’re probably fortunate to be down by 10. We were. We allowed them to run the ball some. We settled those things down and fought our way back, and then wasn’t able to finish the job. You gotta give credit to those guys. They did a great job today, particularly in running the football. That’s unacceptable for us. We’ll absorb the negativity that comes with that. We own that. That’s National Football League play. You’ve got to stop the run. They utilized those two backs and really did a nice job and so I compliment them on that. We’ll assess this and hopefully grow from it and move forward, but make no mistake there’s disappointment today, and there should be. Ramon Foster went out with a thumb injury. Sean Davis went out with an ankle injury. They were unable to return. We had some other guys go down but were able to return. Well assess those the way we always do.

Question: The play at the end of the first half, did they explain why they reviewed that?

Tomlin: They did, but. I still really lack a little clarity there. I was told by an official that the half was over. That’s why we took our team off the field. And then they went into review mode and things of that nature. I’m not questioning whether or not they did the appropriate thing, it just was tough communicating during that time in terms of understanding what were the processes that produced the actions taken. I’m sure we’ll get clarity at some point.

Question: Was it a review, or just a plain rule?

Tomlin: I think in some way the play was reviewed. It was inside of two minutes and it was reviewed. How it got to that point, I didn’t get great clarity on and it’s nothing against Clete and that group. It was an awkward play and they did the best they could.

Question: Was it your decision to not come out for the anthem and what was your thinking with that?

Tomlin: No, it wasn’t my decision. Like most teams in the National Football League, we didn’t ask for this. This was placed upon us by circumstance. I heard rumblings of guys talking during the course of the day yesterday. My contention was that we would not allow politics to divide us. We’re football players. We’re a football team. If many of them felt like something needed to be done, I asked those guys to discuss it, and whatever they discussed that we have a hundred percent participation, or we do nothing. They discussed it for an appropriate length of time. They couldn’t come to an understanding, so they chose to remove themselves from it. They were not going to be disrespectful in the anthem, so they chose not to participate, but at the same time many of them were not going to accept the words of the president. So, we decided to sit it out, to not take the field, to remove ourselves from it, to focus on playing football. And so those were our intentions.

Question: Re: Villaneueva being on the field for the anthem:

Tomlin: Like I said, I was looking for a hundred percent participation. We’re going to be respectful of our football team. Man, these are divisive times in the United States. and it’s a shame, but it is, but we’re not politicians. We’re coaches and professional athletes. If those of us are individuals choose to participate in politics in some way, I’m going to be supportive of that, but when we come out of locker rooms, we come out of locker rooms to play football games, and to be quite honest with you I didn’t appreciate our football team being drug into politics this weekend. And I’m sure that’s a global perspective. But, we’re blessed to do this for a living, and so with that blessing comes responsibility. We understand that. We understand that we’re given a platform that’s a unique one. Many of us are called to maybe do things that we wouldn’t normally do because of that platform, where people apply pressure to us to do things because of that platform. The bottom line is we chose not to play ball today in that regard. Maybe we will, but today, we just said no.

Question: If he talked to league:

Tomlin: We didn’t keep secrets. I called the commissioner this morning and told him our intentions.

Question: Do you think any of that impacted your team?

Tomlin: I don’t. I really think that probably more than anything, it minimized it as a distraction for us. Once we came to that determination, it was business as usual. The big thing is that we remain united. These teams,this game of football is a unique one. We’re all blessed to be a part of it. We all get tolerances because of people that are different because of our association with ball. I think that anybody that’s involved with ball has a high level of tolerance, has a high level of understanding. We feel bad for people that aren’t involved in football, that don’t get an opportunity to have a brother that’s very different than him next to him that he has to rely on, so you gain an understanding. We will not be divided by this. We’ve got a group of men in there that come from different socioeconomic backgrounds, races, creed, ethnicities, and religions, and so forth. That’s football. That’s a lot of team sports. But because of our position, we get drugged into bullshit, to be quite honest with you. And so, some have opinions, some don’t. We wanted to protect those that don’t; we wanted to protect those that do. We came here to play a football game today, and that was our intentions. Thank you.