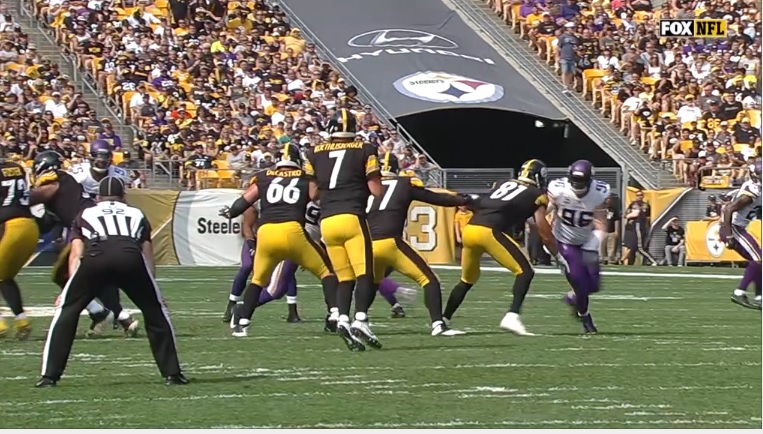 Before the game began, the Pittsburgh Steelers knew they were going long. And so they did with mixed results. Three big plays were gained out of it, a pair of pass interference calls and long catch by Martavis Bryant, but it’s fair to wonder if the offense became too infatuated with it.

After the game, most players explained the rationale.

“Even quarters, their safeties don’t get a lot of depth a lot of times,” Roethlisberger told reporters, responding to if the Vikings’ single high looks was the catalyst. “So it gave us opportunities.”

Those were three game-changing plays, stressing the Vikings’ corners and exposing the lack of depth they have at the position. Xavier Rhodes helped to contain Antonio Brown but Trae Waynes and Terrance Newman did no such thing.

“Anytime we’ve got the athletes to do it, we’re going to take shots,” David DeCastro said.

“If you look at the skill guys we have on the outside, we have that ability,” Foster said.

But the principle of the matter didn’t always meet the practical. As the players pointed out, Minnesota has one of the league’s best defensive lines, making deep drops and the timing needed to let those deep routes develop a difficult task.

“They gave us looks we could’ve taken advantage of,” Roethlisberger continued. That rush was really good. They got in their and made me throw early sometimes.”

While Roethlisberger was sacked only twice, he was under pressure throughout. Something the line certainly doesn’t take pride in.

“We knew it was a good defensive line up front. Didn’t keep Ben as clean as we wanted to. We gave up some stuff. Nothing to be proud of,” Foster said.

Other times, Roethlisberger seemed to pass up receivers underneath for the chance at something downfield. One in particular, a play I’m sure we’ll mention mid-week, had JuJu Smith-Schuster running a wide open crosser underneath. But Roethlisberger threw into double coverage for Antonio Brown on the sideline and the pass was nearly picked off.

Like most everything else on offense, the Steelers are still finding their balance. Live by the sword, die by the sword. Today saw a little of both.