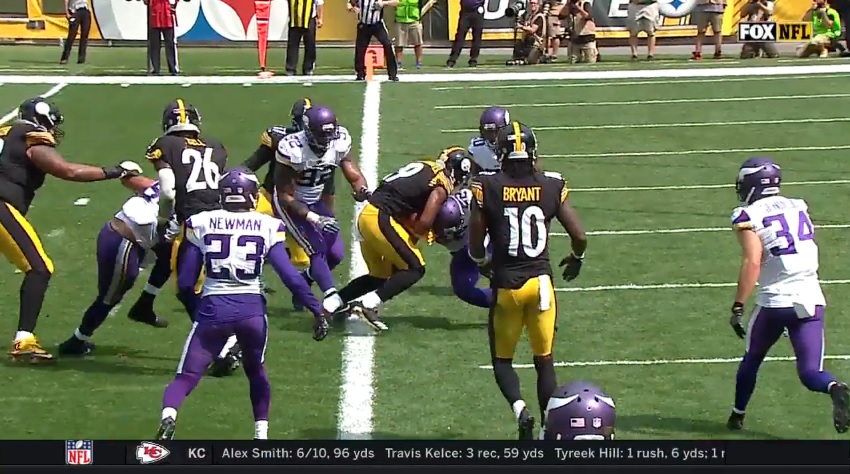 It’s how the Pittsburgh Steelers started every training camp practice. Seven shots. Ball at the two, the offense/defense run seven plays. It’s been a staple for several years. In the first two weeks of the regular season, we’ve seen the fruits of their labor pay off in big ways.

With the ball on the two the past pair of weeks, the Steelers have run two plays. A middle screen to tight end Jesse James and a shovel pass to JuJu Smith-Schuster. Both went for touchdowns. That shouldn’t surprise you considering they were part of the seven shots playbook during camp.

I combed through my training camp notes and found at least three plays where they were run in seven shots. They may have been more on other parts of the field but definitely at least these three. All of which found the end zone.

“1. Seven shots. Dupree/Watt the OLBs. Bryant/Brown/JuJu the 3 WRs, all to the same side. Fun little play. JuJu lined up on the wing, Roethlisberger tosses a behind-the-back shovel pass to him up the middle for the score. Let’s just not try that in a real game.” – Day 14

“6. James Conner split out and then motioned to the backfield. TE screen to David Johnson from Dobbs. TD.” – Day 2

You see an application in practice carry over to stadiums. I know training camp can seem mundane, and a lot of the veterans don’t like it, but when used properly, the drills and plays serve a big-picture purpose. Good coaches don’t “waste” drills, instead focusing on things that are going to help in-game.

A camp practice is all about using that time wisely. Gone are two-a-days. CBA rules have condensed the timeframe coaches can work. But the Steelers make good use of their time working on the most crucial parts of situational football: third down, two-minute, and goal line.

Generally, if you execute in all three of those areas, you’re going to win the game. And those two plays shown above are key reasons why the Steelers are off to the year 2-0.