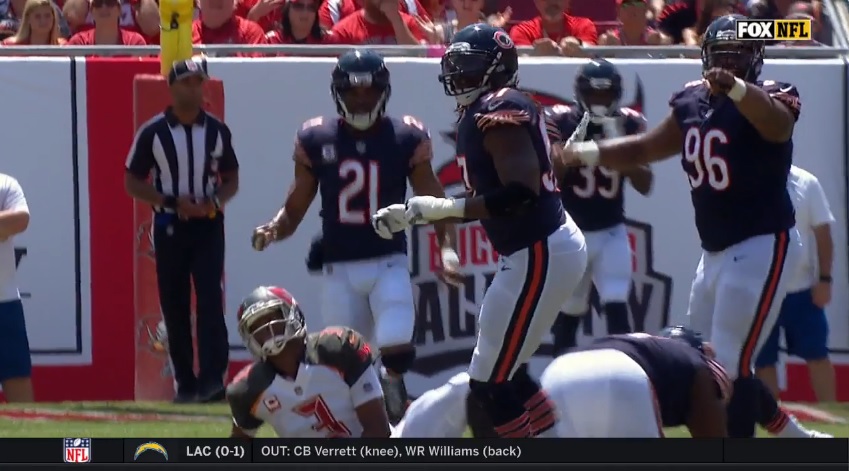 Looking at the Chicago Bears’ defense.

It is a 3-4 front, the first such defense the Steelers have faced this season. As Mike Tomlin pointed out in his press conference Tuesday, they are a bit hybrid-ish, but they’re still going to play with 2-3 defensive linemen on most downs.

The defensive line is made up of: LDE Akiem Hicks (#96), NT Eddie Goldman (#91), and RDE Mitch Unrein (#98). #90, Jonathan Bullard will sub in at RDE. They aren’t a crazy one-gapping team but it’s a solid group who is coached up, use their hands well, and get off their blocks.

Outside linebackers are some hybrid guys. Willie Young (#93) and Sam Acho/Leonard Floyd. Floyd is the freak athlete and first rounder out of Georgia. It’s a solid group. The inside linebackers are a different story. #59, Danny Trevathan, is healthy, which is a plus, but I thought he’s struggled in coverage. And the Bears are working on their third string Buck linebacker. First Jerrell Freeman, then Nick Kwiatkoski. Both are hurt so they turn to “Cheese” Jones, #52.

Against the run, the Bears have allowed just three runs of 10+ yards. That’s the same amount as the Steelers. So they’re doing well, though I think the Steelers can still have success running on them.

They are a varied coverage team. You get a bit of everything from them. Cover 2, Cover 3, and a good deal of Cover 1. They often use a safety who’s buzzed down or a free linebacker as the “rat,” who sits in underneath zone and reads the QB/picks off any crossers. Like here, this time, the safety. 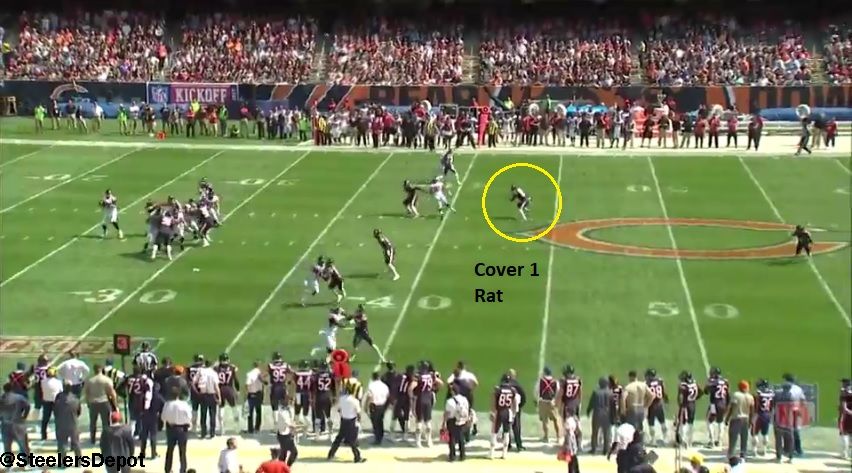 It can be the linebacker when they drop into coverage in man coverage and the away backer has no one to pick up. 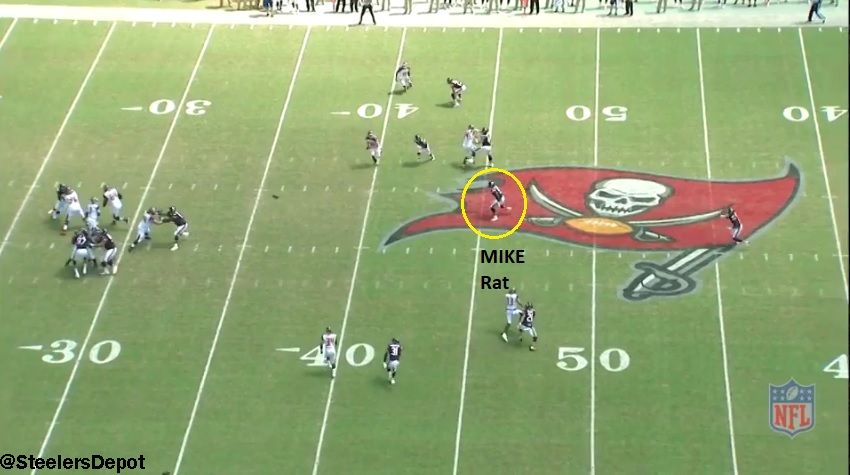 While they run a lot of Cover 2, I don’t think they’re very effective at it. Attack their middle hole player, whether that’s Trevathan (two holding calls) or test Cheese Jones, because, well…Cheese Jones.

Can also throw hole shots, the weakness in Cover 2. Corner routes that demand the safety get off his landmark and drive on the ball. Falcons and Bucs each completed a pass this way.

They aren’t a blitz heavy team. Look even less so than the Vikings. That’s unusual for a 3-4 defense.Saw one 3rd down pressure where both OLBs dropped and an ILB came for a four man rush. But it’s pretty vanilla.

The Steelers head to Chicago this week taking on a Bears team that is, suffice it to say, hungry for a win. After nearly beating the defending NFC Champion Atlanta Falcons in week one, the Bears looked rough at best in Tampa last week. Pittsburgh, on the other hand, looked much better versus the Vikings at home in week two, but those improvements will still be tested against a defensive unit that is underrated especially up front. Let’s get to it.

The Bears typically stick with three down lineman as is the case with a base 3-4 scheme. Mitch Unrein takes over as the RDE, while Akiem Hicks comes in as the LDE. Eddie Goldman, one player the Bears expect great things from, is the nose.

We’ll start with Goldman, because this guy can flat out play. He has been hampered by injuries his first couple of seasons in the league, but if he remains healthy Goldman can have a big effect on games. Goldman uses his hands very well, and can plug up holes in the run game. He’s not an easy force to move, and a big part of the reason it’s hard to run up the gut against the Bears. 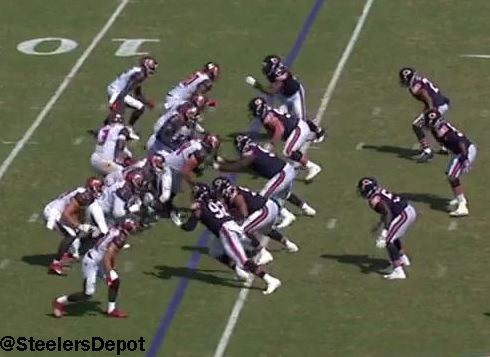 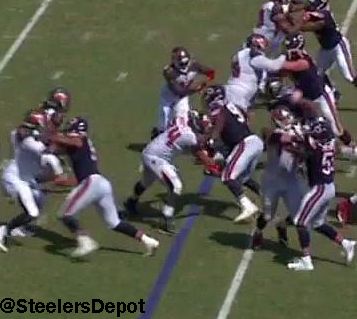 This play is a great example of Goldman’s quickness off the ball. You can see in the first picture, Goldman already has his hands on the center’s shoulders, gaining momentum and leverage right off the bat. You can see that quickness compared to everyone else along the line, some have yet to get out of their stance. This gives Goldman control as he pushes the center back, rips left at the last second and makes the stop in the backfield.

Hicks is a seasoned veteran, who has seen somewhat of a resurgence in Chicago. He’s coming off of his most productive season as a pro logging seven sacks and 54 total tackles. He’s another big body along the line and can take on double teams. Unrein is a similar story as Hicks. Big guy who is hard to move, won’t make plays in space, but is coming off of his best season as well. Basically this line is large, so off tackle and zone runs are likely to be the most rewarding versus dive plays etc. We’ll see an example of that a little further down.

This is the group that boasts the most talent on this Bears team. Danny Trevathan and Cristian Jones will be the inside backers (Jones steps in for the injured Nick Kwiatkowski). They’ve been plagued by injuries early on, losing ILB Jerrell Freeman for the season last week, and Kwiatkowski may have the same fate. Leonard Floyd is your ROLB, and Willie Young is the LOLB who lines up mostly on the strong side.

Trevathan is a jack of all trades linebacker that has the speed to play sideline to sideline, as well as make plays in the backfield. He’s very athletic, but the knock on him is his size. At 6’0″ 240lbs, Trevathan can be compromised when taking on guards in the second level. Floyd is a young player who is certainly the most athletic of the group. He was hampered by injuries last season as a rookie, but still managed seven sacks in twelve games. He has trouble with some of the bigger tackles in the league, and can have issues sealing the edge, but his coverage skills set him apart. Willie Young is another guy that has to be accounted for. He’s a high motor guy who gets after the quarterback (24 sacks in the past three seasons).

I mentioned their effectiveness up the middle a little earlier, and sometimes with this group that can be due to overpursuit and not containing the edge. See this play below versus the Falcons. Willie Young squares up the tight end, but angles inside, allowing Devonta Freeman to cut the run outside. Young fails to gain enough leverage to make up for his positioning. Looks like he’s held on the play, but his position makes it unlikely he impacts the play. Fuller is running with the wideout before the receiver blocks Jackson, Fuller not able to reverse field in time to make the play. Receiver basically takes two defensive backs out of the equation. It’s an easy touchdown for Atlanta.

This is a banged up group, but has a good mix of youth and experience. Prince Amukamara looks like he is ready to return from injury, and it’s just in time to face off against one of the leagues best receivers in Antonio Brown. Marcus Cooper Jr. comes in as their right cornerback, whereas Kyle Fuller looks to be inserted in the slot as their nickel which was the plan coming into the season prior to injuries.

Rookie Eddie Jackson is the free safety, and veteran Quinton Demps the strong safety. Amukamara has the ability to shut down some of the best receivers the league has to offer, but his play has been inconsistent throughout his career. He plays aggressively, but that can just as easily come back to bite him, as he is vulnerable to the deep pass.

Fuller, a former first round pick, hasn’t lived up to the expectations in Chicago, but may find a lot of success working in the slot this year. He’s quick and good with his hips; it’ll be an interesting matchup to watch against Eli Rogers.

Jackson is an intriguing young player. They use in the box occasionally and he can be productive there. In this play against Tamp Bay, the Bears are sending all five players along the line of scrimmage opening up the “B” gap for Jackson. Vincent Jackson is put in a tough position as he’s supposed to block the nearest defensive back, but Eddie Jackson hit the hole too quick and makes the tackle for a loss. 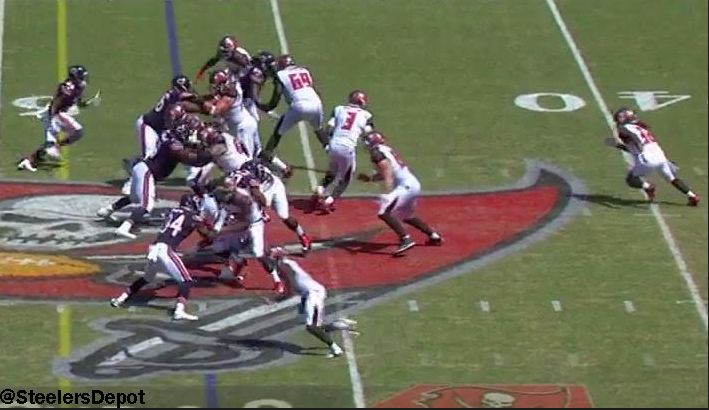 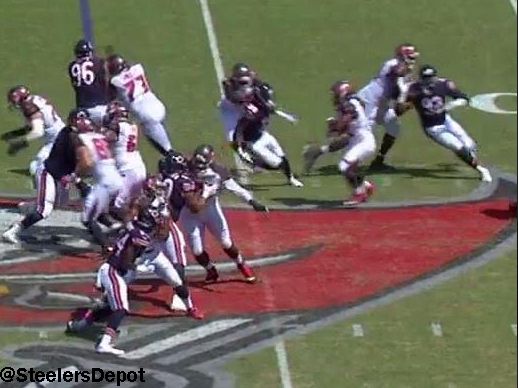 But the Bears defensive backs have struggled against the deep ball over the past couple of seasons, and it’s continuing here in 2017. Take this next play, for example. Jameis Winston runs the play action, Bryce Callahan is in the nickel working on DeSean Jackson. Callahan runs with him, but loses Jackson about ten yards into the route, expecting safety help over the top. But you can see when the ball is thrown Eddie Jackson’s hips are turned outside, biting on the route, and by the time he readjusts DeSean Jackson is already on his way to a touchdown.

Lucky for the Bears the Bucs couldn’t connect on the play, but this is something the Steelers can look to exploit. If the offensive line does their job this Sunday, Big Ben could have a field day through the air.