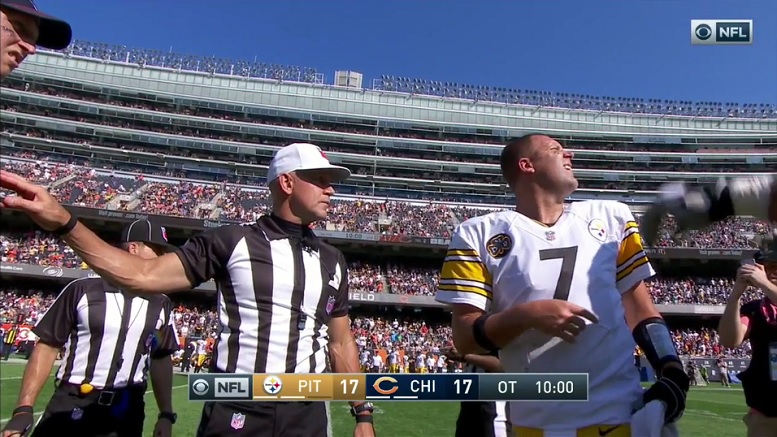 The Pittsburgh Steelers Sunday game against the Chicago Bears went into overtime and while they ultimately loss the coin-toss, the outcome was ultimately what head coach Mike Tomlin desired.

During his Wednesday interview with the media, Steelers quarterback Ben Roethlisberger revealed that the plan going into Sunday’s overtime coin-toss was for the Bears offense to have the football first.

“All I knew, Coach [Tomlin] said he wanted them to have the ball first,” Roethlisberger said Wednesday.

While it certainly doesn’t matter at this point, it certainly would have been interesting to see how the game would have ultimately played out had the Steelers won the coin-toss and taken the football to start overtime. After all, the Steelers defense had pretty much struggled to stop the Bears rushing attack for most of the game.

Additionally, giving the Bears the football first allows them the opportunity to end the game with a first-possession touchdown, which ultimately happened thanks to a long drive that consisted of four consecutive running plays.

It seems like Tomlin would want the football in the hands of his offense with a chance to win the football game on the opening possession, but I digress.

After losing the coin-toss, Roethlisberger was only concerned about which direction the sun was in.

“Yeah, you’ve got one quarter to play, if you will. Just trying to figure out which way if my receivers had to look into the sun what was the best way to go about it,” the quarterback said.

Roethlisberger’s Wednesday media session ended with a question about the sun and if it caused his receivers any problems during the game and specifically on the first offensive play of the game when he failed to connect with a wide open Martavis Bryant deep down the field.

“I don’t think so,” Roethlisberger said. “I mean we’ll never use any of those excuses, or anything like that  If I give him a better ball, he probably runs through it and scores.”