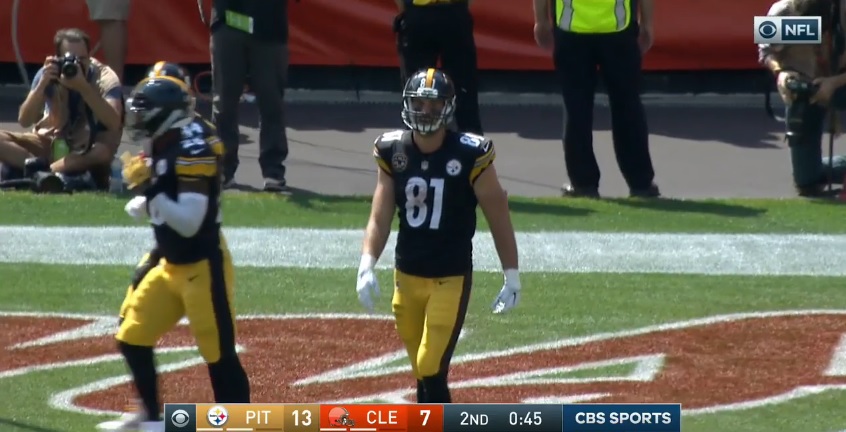 The biggest winner in the Vance McDonald might have somehow ended up being…Jesse James. A clearly highly motivated James had one of the best games of his career, becoming the first Pittsburgh Steelers’ tight end to score twice in a game since Heath Miller in 2012.

Appearing on the Cook and Poni Show on 93.7 The Fan this afternoon, Ben Roethlisberger says he’s seen a new Jesse James. A man who was not happy with seeing the Steelers add another tight end.

“I think Jesse has benefited the most of anyone from the Vance trade,” Roethlisberger told the show. “He kinda took it personal. He has performed in practice above standards, if you will. He’s gotten much better, he’s running faster, he’s doing more things, his play has really picked up.”

James’ first touchdown, a crucial 3rd and goal from the four, highlighted an area he’s struggled in throughout his career. Combative red zone catches. But James made a great play in the end zone, wrestling the ball away and completing the catch.

“I preach with Jesse. He’s bigger and stronger than most people. He’s got big, strong hands. He needs to use his hands and own the ball when it comes to him in the end zone. There are too many times I get on him in practice where a DB or someone will knock it out of his hands. And I’m like, ‘you’re too strong, no one should be able to get the ball out of your hands.’ And he listened.”

On that play, James was the stronger, more physical player, and got the Steelers their first offensive points of the season. He finished the day with six catches for 41 yards, both of which were second on the team, and those two scores.

“I think that shows the growth in Jesse. The comfort and trust I have with him. I was so happy to see it. I was through the roof pleased with the catch by him.”

James later caught another touchdown on 3rd and goal from the two, a middle screen the team repped the heck out during camp. While McDonald didn’t see a ton of snaps and seemed to struggle, he had a drop and a holding call, James figures to dominate the reps this Sunday provided he can continue to make plays like that.

The red zone is where the Steelers needed James to thrive. So far, so good.