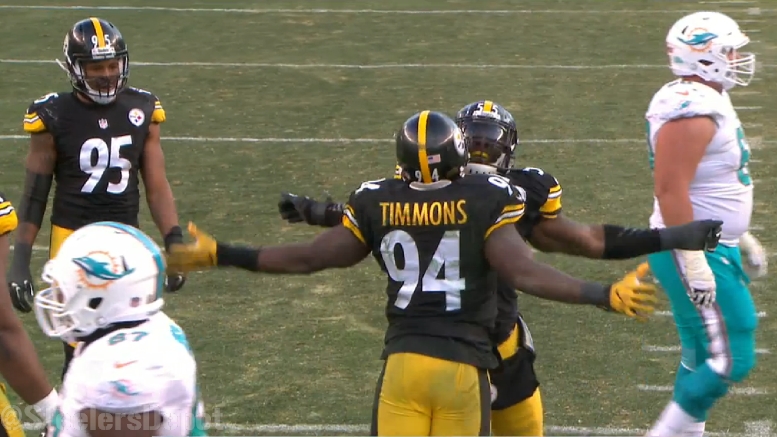 Jason La Canfora has so more information on the Lawrence Timmons’ situation with some relevant updates for Pittsburgh Steelers’ fans. According to La Canfora, Timmons said he wanted to return to the team after visiting practice on September 8th.

“Sources said he told former Steelers teammates he wanted to be back in Pittsburgh and said things along of the lines of it was a mistake to have ever left.”

Not everyone knew Timmons was planning on showing up, per the report, though Mike Tomlin was one who was clued in. Timmons had been displaced due to Hurricane Irma and as we found out, his young daughter still lives in the city. So him returning to Pittsburgh wasn’t shocking.

Of course, you know most of the rest of the story. Timmons went AWOL before the Miami Dolphins first game in Week Two and has been suspended by the team ever since. His status with the team is up in the air, head coach Adam Gase offering little in the way of comment.

La Canfora says the suspension does not have a clear end date.

“Dolphins officials are not putting a timeline on Timmons’ suspension, but I’m told it will last beyond this week and it is possible Timmons never plays a game for the team.”

Perspective is important and Timmons’ mental health and well-being is at the top of that list, not football. But if the Dolphins do release him, his suspension can only last a total of a month, there will likely be a conversation of if he will reunite with Pittsburgh. If this report is accurate, Timmons clearly wants to come back home. Then it would be a matter of if the Steelers want him back.

Vince Williams has filled in well taking over his Buck linebacker spot and the Steelers have plenty of confidence in Tyler Matakevich, the top backup at either spot. Timmons would probably have to return as a backup, though those are all questions for when and if the opportunity comes.