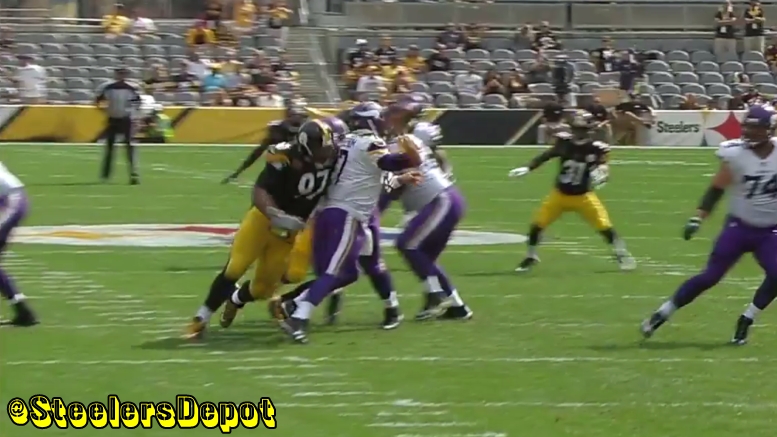 Hey that Cameron Heyward guy sure seemed to play a heck of a game out there yesterday. The Pittsburgh Steelers’ defensive captain, in fact, has been, dare I say, on fleek so far this season, certainly notable given that his 2016 season ended with a torn pectoral muscle.

But the 2011 first-round draft pick has looked no worse for the wear so far and has clearly been one of the top players on the field for the Steelers on either side of the ball, a fact made all the more important in the absence of Stephon Tuitt, who has missed all but two snaps so far, but who is hopefully not far from getting back out on the field.

The first ‘play’ that he made yesterday actually came courtesy of drawing a holding penalty on the Vikings’ fourth offensive play of the game, gaining penetration in the backfield on an outside run from Dalvin Cook that would have picked up eight yards without the flag.

He followed that up with a run-stop for no gain two plays later, and then helped chase down a nine-yard gain on a draw for third and 20 that also technically was a run stop, given the down and distance, so he was instrumental in ending the Vikings’ first drive.

And he didn’t help the second one get off to a very good start either, as he and T.J. Watt met in the backfield to drop Cook for a loss of four on the first play of the drive. He dropped the rookie running back for a loss of three yards later in the game as well.

Put simply, there were stretches of the game in which he was simply dominant, and far outmatching his counterparts along Minnesota’s offensive line. And that is exactly what the defense was missing without him down the stretch of the season and into the playoffs.

It is frankly great to see Heyward playing the way he is right now, and the fact that he can do so while still not being required to play virtually every snap in the game is something that I think is going to make a difference later in the season. After all, it’s something that he himself has been pushing for the past couple of years.

As an aside, Tyson Alualu’s addition in the offseason is already paying dividends if you consider the extent of his playing time through two games already, essentially functioning as the starting left defensive end in both contests.

On the season, Heyward already has nine tackles, the majority of which are run stops, to go along with a sack, but even those numbers do not fully encapsulate the impact that he has had on the Steelers’ defense. He is certainly justifying his designation of captain and showing no ill effects of last year’s tumultuous, injury-plagued season.