Mike Tomlin described his Pittsburgh Steelers as a team still very much in development during his weekly press conference Tuesday and though the team has many minor snags to work through, one area that sticks out is the run game. After two games, the Steelers find themselves in an unusual position, 27th in the NFL in rushing yards and dead last in yards per carry with just 2.8 yards per rush. The uncharacteristic start has caused many questions and fingers to be directed towards running back Le’Veon Bell.

What is behind Bell’s slow start, in which he has averaged just 3.2 yards per carry? Is it his absence from the team during the offseason, too many Dairy Queen blizzards or is there a reasonable, non-sensationalist answer to Bell’s sluggish start? The answer could lie in Bell’s careers numbers.

Looking at Bell’s career numbers will provide a clearer outlook on whether there is legitimate reason to worry or if Bell’s slow start is nothing to lose sleep over. At first, it is easy to spot that Bell’s 3.2 yards per carry is the worst of his career and his slowest start to a season since his rookie year in 2013. But that is hardly breaking news. What is more revealing is how Bell’s numbers organize themselves when his seasonal rushing numbers are split in two halves – one for the first half of Bell’s season and the other for his second half. 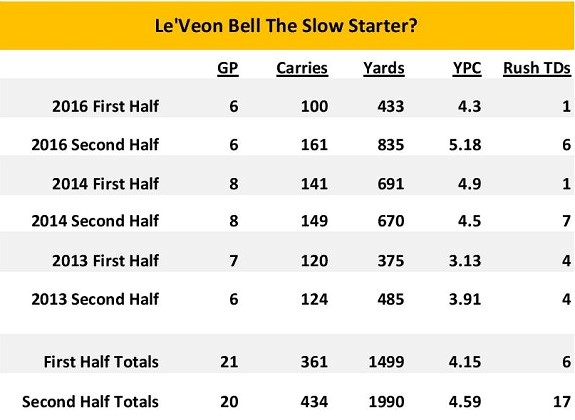 Before venturing further, it must be said that Bell’s 2015 season was omitted due to the running back only playing six games, way too small a sample size to contribute to the research. What the research does hint towards though is that Bell may have a natural tendency to be a slow starter, picking up steam as the season progresses.

It is easy to forget that concerns about Bell’s start were whispered even during his MVP-caliber 2016 season. Bell averaged just 4.3 yards per carry during the first six games of his 2016 season, a figure heavily inflated by his 144-yard season debut against the Kansas City Chiefs. Removing the Chiefs matchup drops his 4.3 yards per carry into a pedestrian 3.5 yards per carry.

But as Bell would likely tell you, the easiest way to make people forget about a slow start is to have a strong finish. That’s exactly what Bell did last season, running for over 5 yards per carry the rest of the way and running the Steelers straight into the postseason.

Historically, Bell has been more of a finisher than a starter, growing stronger as the season takes its toll on opposing defenses. Bell’s style of play is a copycat identity of his splits, never one to run away from the pack, the running back takes a more deliberate and patient approach. Now the running back is rightfully asking for the same patient approach out of the Steelers’ fanbase.