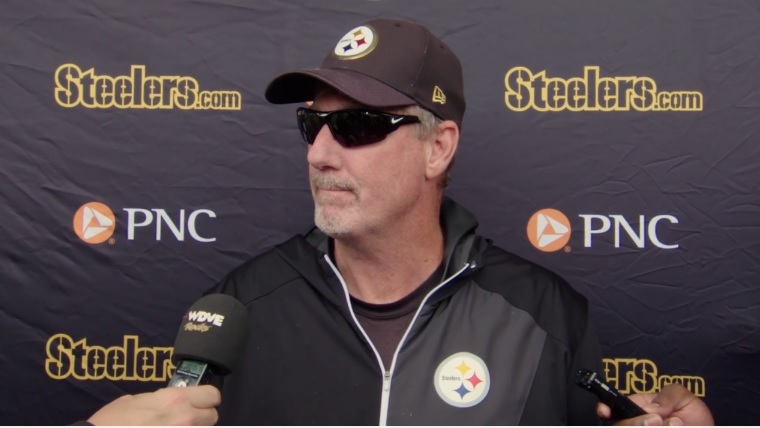 Keith Butler has gotten a lot of new toys in the offseason. Drafting T.J. Watt in the first round and picking up Joe Haden and J.J. Wilcox during the same week. Haden has been the headliner given his resume and price tag. And Butler seems to be happy with what he’s seen in his newest cornerback.

“I like what I’ve seen out there on the field,” Butler told reporters via Steelers.com. “He appears to be healthy to me.”

Health, Butler said, is the driving reason behind why the Cleveland Browns released him.

“I talked to some friends of mine who I’ve coached with here before, who have coached him over there. They were still well impressed with him. They told me he had been hurt last year and that had been the problem. It was more health and money with him than it was anything.”

You could surmise Butler was talking about former Browns’ defensive coordinator Ray Horton, who was with the team last year and had a stint in 2013 in the same position. And Kirby Wilson, named the running backs coach last season.

There were several reports last year that Haden dealt with dual groin injuries that sapped him of his speed and hindered performance. He wound up playing only 13 games and saw action in just five in 2015.

For what it’s worth, Haden confirmed he was fully healthy and apparently showed off that speed, keeping up with Darrius Heyward-Bey during one practice rep.

Haden on running sideline with DHB in practice: “All of these dudes are running, but especially being able to run against him, I feel good.”

Heyward-Bey is still regarded as the fastest receiver on the team so that clearly is a positive sign.

Butler compared the falling out in Cleveland similar to what happened in Pittsburgh with LaMarr Woodley.

The Steelers can only hope Haden’s career doesn’t end like Woodley’s. If Haden does turn things around, the Steelers got a steal.