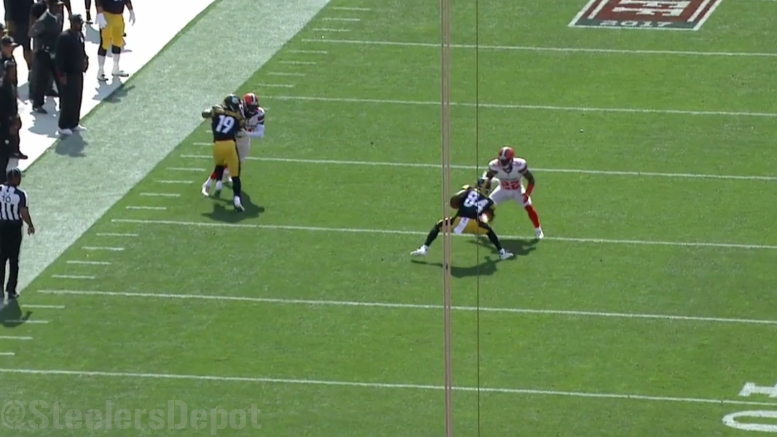 On a certain level, you could say that the debut performance of Pittsburgh Steelers wide receiver JuJu Smith-Schuster was crap. He did not gain a single yard himself, yet he did manage to draw not one, but two penalties for holding on the offensive side of the ball, so his net productivity for the team was -20 yards.

On his 22 offensive snaps, the Steelers produced a net gain of 4.27 yards per play, plus an interception, all but five of which were passing plays. Those are poor numbers, but they obviously don’t tell the full story about his game, and the coaches are well aware of this and are optimistic about his ability to contribute right now.

It is kind of hard to gain yards, after all, when you are not targeted a single time in the entire game, and he was on the field for more than a dozen passing plays, so it’s hard to put too much blame on him for not being the recipient of passes.

That is all the more difficult when you consider the fact that a little over half of the passing snaps that he saw on Sunday came on plays with four wide receivers on the field, of which he is regarded as the fourth, behind Antonio Brown, Martavis Bryant, and Eli Rogers, all of whom logged more snaps than him during the game.

On the flip side, however, he was also the lone wide receiver on the field for four of the Steelers’ six plays run out of 22 personnel, with two tight ends and a fullback on the field. While it is not surprising that Brown was not on the field for any of those snaps—they are almost always running plays, after all—it is interesting to see Smith-Schuster in that role.

Traditionally, that role has gone to Darrius Heyward-Bey, who was regarded as the team’s best blocker at the position, but it seems that the coaches are already confident in Smith-Schuster’s ability to execute those responsibilities after taking a crash course on it with Hines Ward.

The fact that his last name is also hyphenated doesn’t hurt, either.

Despite the fact that he was statistically unproductive in his debut, that has not put a damper on his or his coaches’ preparation for him heading into Sunday’s game against the Vikings, and according to Jeremy Fowler, he showed some “downfield playmaking” during practice this week.

According to the ESPN reporter, Smith-Schuster said the team is “just trying to give me an opportunity, see what I can do”. He also said that he likes to be able to work both on the outside and in the slot.

On that note, I can tell you that seven of his 22 snaps came out of the slot—seven of 16 snaps out of 11 or 01 personnel—but he saw a healthy amount of work on the outside as well, on many of which the Steelers used Brown in the slot.