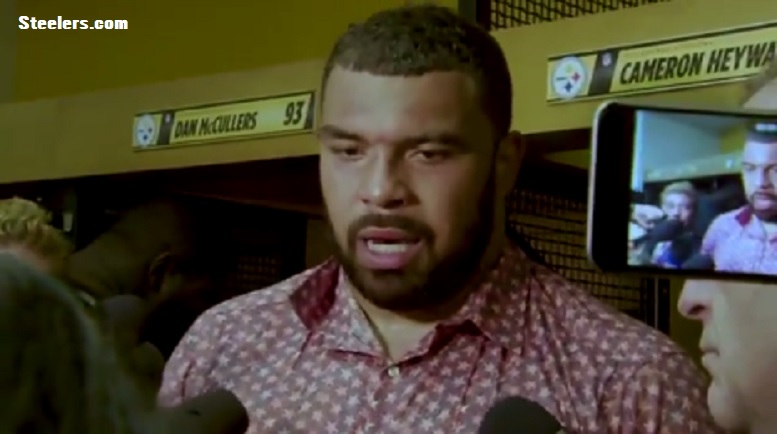 The Pittsburgh Steelers allowed the Minnesota Vikings to rush for 91 yards Sunday at Heinz Field and defensive end Cameron Heyward wasn’t too pleased about that.

After Sunday’s win, Heyward was asked if holding the Vikings to just 91 yards made him feel “ok” even though it was clear Minnesota’s main focus was to run the football against the Steelers defense.

“Just? That’s too much and especially when we had them at 18 yards,” Heyward said. “They’re a good offense. They have a good running game, three really good backs, but we have to hold ourselves to a higher standard.”

In the first half of Sunday’s game, the Steelers defense allowed just 25 yards rushing by the Vikings offense on 12 carries. In the third quarter, however, Vikings running back Dalvin Cook had 49 yards rushing on his own on four carries and that included a 25-yard run off right tackle that moved the football down to the Steelers one-yard-line. One play later, Vikings fullback C.J. Ham scored on a middle dive play.

“We’ve just got to fill a little better and not give up those big runs,” Heyward said after the game. “Even in the third quarter when we gave it up, if we dont give that up, we set our offense good, we keep them in good field position and we can score some more points.”

On that long run by Cook, the Vikings second-longest play from scrimmage of the game, it looked like Steelers second-year safety Sean Davis did a poor job of holding the edge on the left side of the defense. Him getting trapped inside allowed Cook to go untouched around the right end. You can see that play below.

“They lulled us to sleep on like a couple of runs, but that’s something that we can grow from and learn from and continue to get better,” Heyward said.

In addition to letting the Vikings average 4.55 per rush Sunday, the Steelers defense gave up quite a few runs that were successful during the game. In fact, of the 20 total rushes that the Vikings offense had during Sunday’s game, nearly half of them, 9 to be exact, were successful ones based on down, distance and yards gained.

The Steelers will play a Chicago Bears offense in Week 3 that is currently averaging 4.14 yards per carry. 125 of their 145 total rushing yards came against a seemingly good Atlanta Falcons defense in Week 1. However, it is worth noting that just 12 of their 35 total rushes were successful ones in their first two games. Additionally, one of those 35 rushes was a 46-yard gain by Bears running back Tarik Cohen around left end against the Falcons.

Heyward: “We’re going to be even better.” pic.twitter.com/0L1ZOMNFvq