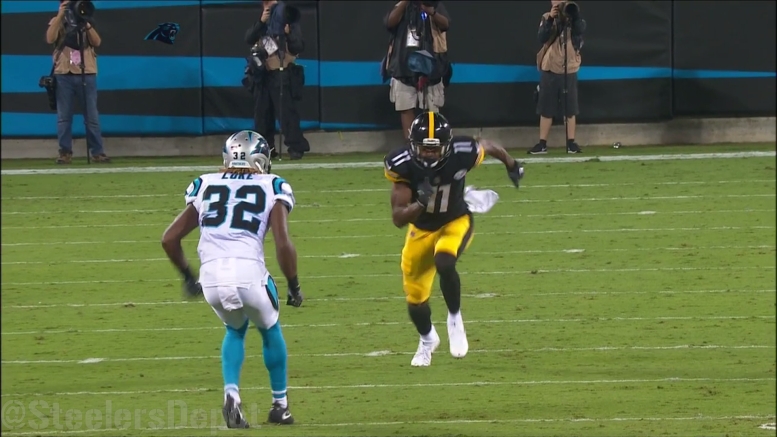 After three games and a whopping six touchdowns scored on offense, the Pittsburgh Steelers are looking to shake things up, according to reports, a little bit as they head into Baltimore for the fourth game of the season.

While they’ve managed to come out of the first three games with a pair of victories, they have for the most part found points hard to come by. I’ve already talked about this previously, but they have only scored on 11 of their 33 drives which ranks below average in the league, as does their points per drive, despite having top-10 field position.

One of the changes that they are evidently looking to make is getting Justin Hunter some opportunities to get on the field. Despite the fact that they have had some injuries on the inactive roster, they have as of yet not chosen to give him a helmet on game days.

After Hunter ended up making the roster, I wrote an article about the fact that, given the decision that had been made, they ought to justify it by actually giving him a role in the offense, though I cautioned that would be difficult to do, because it is very hard to find a fifth-string wide receiver who doesn’t contribute on special teams a spot on the active roster.

With respect to the fact that I already went on record in saying that the Steelers might as well utilize his talents if they are going to carry him on the roster, it will be interesting to see what impact, if any, he will have, and at whose expense they will come.

I do have a lurking suspicion that this is not much more than rearranging deck chairs, however, though it’s not exactly the Titanic, either. Just a big boat with some engine trouble. Moving around the furniture isn’t going to get the boat going any faster.

How many snaps could he reasonably even see? Antonio Brown only comes off the field for a few snaps per game. Martavis Bryant can go in and out of the lineup, but they have already been mixing and matching with JuJu Smith-Schuster and Eli Rogers.

Smith-Schuster played the majority of the Steelers’ snaps on Sunday—a good majority, that is—but that doesn’t have to be set in stone. Hunter, as well, can present a big-bodied option out of the slot, which is what they seem to be looking for, as that is where the majority of the rookie’s snaps have come.

Ultimately, he may only get a handful of snaps, say five to 15 at most, depending on the circumstances in the game, or maybe they even give him a series or two—assuming that everybody is healthy, that is. If there are issues with other receivers, then he can play a larger role.