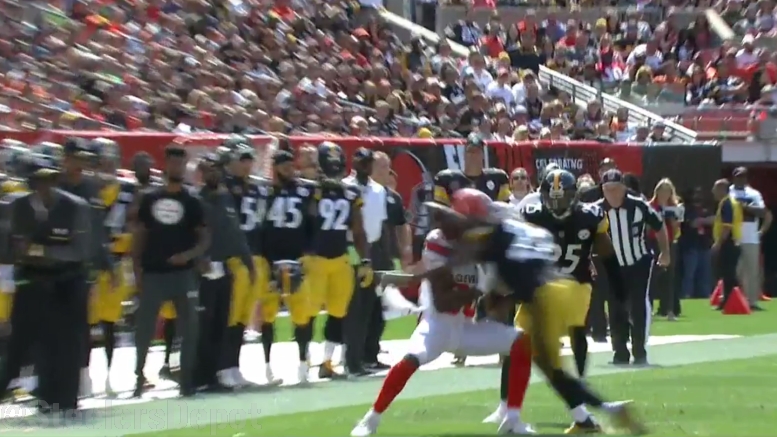 There seem to be pretty mixed opinions when it comes to the hindsight of William Gay’s hit on Cleveland Browns wide receiver Ricardo Louis in the second half of the Pittsburgh Steelers’ victory on Sunday in the opening game of the regular season.

Objectively, looking at the replays of the play and understanding the rule on illegal contact for defenseless players, it is frankly unambiguous that what occurred on the play is something that is going to be penalized, and you can rest assured that Gay will also be getting a notice later this week that he has been fined.

To be clear, a wide receiver who is attempting to make a catch, even if he has already bobbled the football, is deemed a player in a defenseless posture and thus has the requisite protections under the rules. It is also important to point out that intent is irrelevant when it comes to determining whether or not a play is a penalty. The relevant factor is the actual result, and the result was a clear penalty.

But it is also not hard to understand why many groan over such penalties. I really don’t have any doubt in my mind that Gay had it in mind to strike Louis in the head and neck area when he was going in to make the tackle or break up the pass not short of the sticks on a third-down play. He just wanted to get his defense off the field. He doesn’t have a history of questionable hits.

As unambiguous as the illegal contact on the play is, it’s also unambiguous to see that it was in part instigated in fact by the bobbled reception by Louis, who was forced to lower his head as he tried to concentrate to catch the ball a second time.

That is why you have so many defensive players in particular react in certain ways to these penalties. You can count Cameron Heyward among them, who in an interview in the locker room yesterday even went out of his way to point out that he was restraining his comments because he didn’t want to be fined.

In a video from Jeremy Fowler, the defensive end said, “I’m trying not to get fined, but I was very surprised by” the fact that the officials, about 25 seconds after the initial hit, threw a flag on Gay’s hit. “It was a heck of a hit. I had already run off the field thinking we were going to sit down and then they said we had to go back out”.

It is an impossible task to legislate out of the game every incidental hit like this, but the legislation has had an effect in reducing such hits, helping to change the way that players approach a tackle. This was an example of a play in which it will be difficult to avoid, but the rule does serve a purpose—beyond, of course, destroying the game.

That was sarcasm at the end there, by the way.