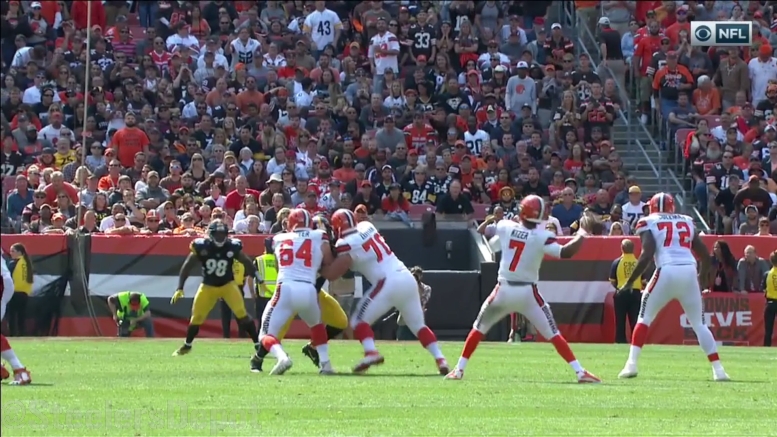 Even though he managed to play out the entire game for the Cleveland Browns, right guard Kevin Zeitler injured his finger in Sunday’s season opener against the Pittsburgh Steelers. It was serious enough that he was required to have a procedure in order to repair it—but reportedly, not serious enough to result in him missing any time.

Of course, it’s not as though the offensive line positions are known for their delicate work. They largely use their arms as obstructions, and as long as it doesn’t cause extreme pain every time he puts his hand on somebody, it should not be much of an issue for him to play through the injury.

According to Head Coach Hue Jackson, the veteran guard had the procedure done yesterday, and in fact he expects him to return to practice as early as today, or if not, by Friday, which should put him in no jeopardy of missing the Browns’ next game, an important one against the Ravens.

While Zeitler was a major free agent acquisition of the franchise, he is by no means a new face to Steelers fans, because he spent his first five seasons with the Bengals. In fact, he was drafted in the same round in the same year as they drafted their own accomplished right guard, David DeCastro, and the two have been somewhat linked ever since.

While Zeitler has been widely praised for his even play, it has not yet translated into accolades. I suppose that becomes more difficult when you are in a division that is currently populated with a high degree of talent at your position, as it hosts not only DeCastro—and Ramon Foster—but also arguably the best in the game, the Ravens’ Marshal Yanda.

As for DeCastro, he has made the Pro Bowl in each of the past two seasons. He made the first-team All-Pro list in 2015 and was a member of the second-team unit a year ago. Last offseason, the Steelers signed him to a five-year, $50 million extension.

During free agency back in March, the Browns gave Zeitler a five-year contract worth $60 million, which made him the highest-paid at his position in the entire league, averaging $12 million per season. Yet in spite of their investments along the offensive line, Cleveland still gave up seven sacks and averaged fewer than three yards per carry.

And they are preparing next to face a team that just pitched a shutout in the Ravens. Zeitler and their other free agency acquisition, J.C. Tretter, are going to have their hands full with Baltimore’s combination of Brandon Williams and Michael Pearce. Javon Hargrave had his way with Tretter on a few occasions on Sunday.