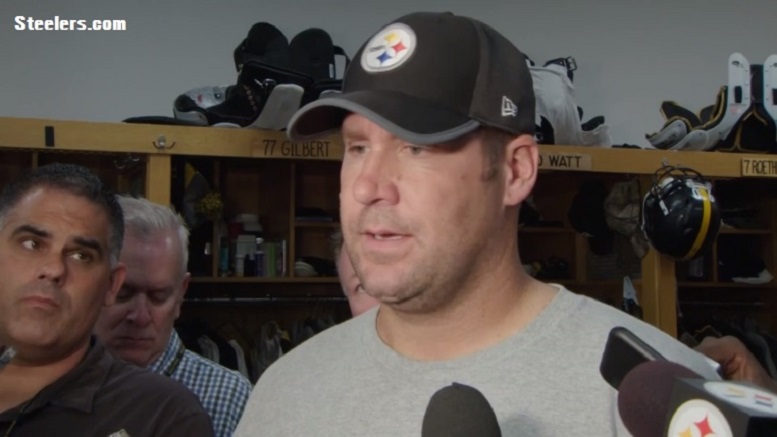 The Pittsburgh Steelers offense has yet to live up to their perceived potential so far in the team’s first three regular season games and while the team did win their first two contest in spite of that, it was a different story Sunday at Soldier Field. Steelers quarterback Ben Roethlisberger continued to take the blame for Sunday’s overtime road loss to the Chicago Bears when he talked to the media on Wednesday.

During a Tuesday radio interview, Roethlisberger talked openly about how he’s probably targeting wide receiver Antonio Brown a bit too much in the passing game and said he needs to be more patient moving forward. On Wednesday, the quarterback was asked to explain what being more patient means and entails.

Along those same lines, Roethlisberger was then asked if he would like to have an established No. 2 wide receiver, or does it even matter to him being as he knows he has Brown on the field with him.

“It doesn’t matter,” Roethlisberger said. “It’s on me, it’s not on the other guys. I need to be better. We can be a better offense when I play better. We win the game last week if I play better. So, it’s not about a No. 2 or 3, or establishing guys, we’re going to rotate guys in because we’ve got enough weapons we need to do that. I just need to be better at getting more guys involved.”

So, is Martavis Bryant the team’s No. 2 wide receiver right now?

“Yeah, I think so,” said Roethlisberger. “Is that what the depth chart says?”

Roethlisberger was then asked if he feels like he’s currently on the same page with Bryant heading into Week 4.

“Yeah, there’s a couple of things here and there, one step here, one step there, a throw being six-inches too long, too high, too low, whatever it is,” Roethlisberger said. “So, we’re close. We’re not where we were, but I guess that’s probably to be expected. But I’d like to think that we’re making strides. Both of us and like I said, it starts with me.”

Are there any changes Roethlisberger would like to see in the offense overall moving forward?

“The quarterback needs to play better,” he said.

Sunday at M&T Bank Stadium, Roethlisberger and the rest of his Steelers teammates will look to rebound against a Baltimore Ravens team that suffered their first loss of the season Sunday in London, England to the Jacksonville Jaguars and the quarterback spoke about that upcoming contest on Wednesday.

“We’re playing a really good defense this week again it seems like,” Roethlisberger said. “This defense is opportunistic, they create a lot of turnovers, a lot of interceptions, especially. But we still need to come out and run the ball and almost force run it at times.”

Roethlisberger, who has had his struggles on the road over the course of the last few seasons, hasn’t started and won a game in Baltimore since 2010. Not only does he currently own a 2-6 record as a starter in games that have been played in Baltimore, he’s never thrown for more than 280 yards in a game in the Charmed City and has thrown more interceptions (10) than touchdowns (6) in those previous eight starts.

Ben Roethlisberger talks about the rivalry in this week’s AFC North matchup in Baltimore. pic.twitter.com/V5v1adImOR