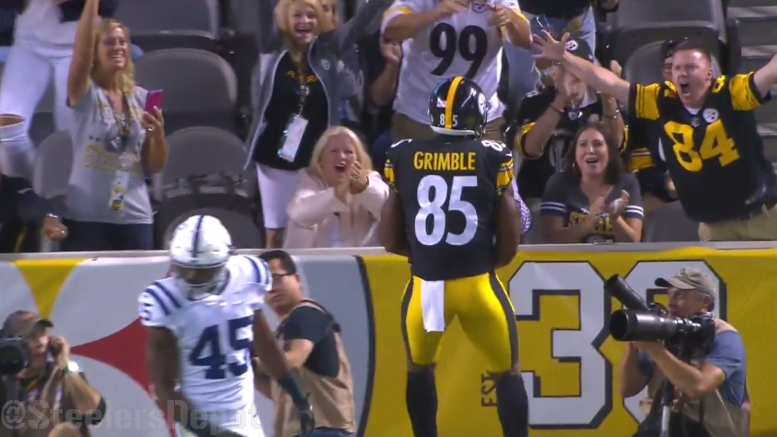 The tight end group really needed a rebound performance last night after struggling with blocking and catch on Sunday, and they did just that. While Jesse James did better, and made a nice adjustment on a pass thrown behind him on third and 12 to move the chains, though, I am going to focus here on Xavier Grimble, who was not putting in stadiums what he was showing in practice as a blocker.

The second-year tight end should know quite well by now that nothing is handed out in this league, especially to players like him. The USC product thought it would behoove him to come out of college early, and all it did was cause him to go undrafted.

He kicked around practice squads, and was finally signed to the Pittsburgh Steelers’ just before the start of the 2015 season. He remained there all year, beginning to impress his coaches and teammates, but he still had an uphill battle to make the roster the following year.

He did so largely by virtue of the fact that the tight end they signed in free agency, Ladarius Green spend the first half of the season on the Physically Unable to Perform List. He showed enough while on the roster to remain there when Green was activated.

Though the Steelers failed to upgrade the tight end position in free agency, even after releasing Green, Grimble still knows that he has to earn his roster spot, because you never know who can come up behind you. For the past two weeks, that had been Jake McGee.

The undrafted rookie seemed to be quickly closing the gap in landing a roster spot—and he still might—but last night, Grimble showed that he does still belong, and he contributed both as a blocker and a pass catcher in a way that he very much needed to.

Particularly impressive was the opening drive of the second half, during which he turned in a McGee-like performance as a blocking tight end, getting out on the edge to help instigate a couple of nice runs. He also handled himself with some in-line blocking.

Something that McGee has not gotten a chance to do through two preseason games was show his receiving ability. Grimble has gotten those chance, and in the last game, he literally dropped the ball. But not this time.

The second-year man had two catches on that drive, including an eight-yarder, capping off the drive with a 10-yard touchdown reception in which he went over the defender’s head to snare it away from his body. He showed soft hands on both efforts, and later added another eight-yard reception as well.

He did have a holding penalty later in the game, but this one to me was about potential. This is the player that Grimble can be. The problem is that he often isn’t, and his inconsistency has been maddening at times, especially for those who have pulled for him in the past, such as myself.