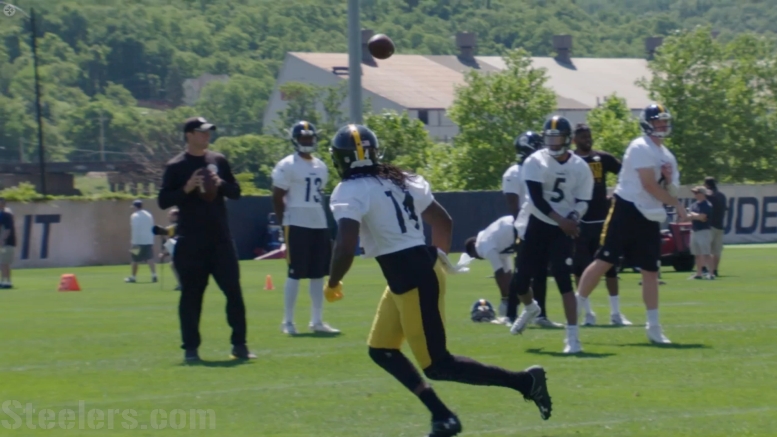 Pittsburgh Steelers wide receiver Sammie Coates has spent all of training camp on the team’s Active PUP list after undergoing a knee cleanup procedure done prior to him reporting to Saint Vincent College in Latrobe. The former third-round draft pick has reportedly been ramping up his work on the side during practices and after Monday’s session, head coach Mike Tomlin was asked if the Auburn product is close to being removed from PUP.

“He’s working, you guys see him working. He’s getting close,” Tomlin said of Coates. “We’ll see what it looks like when we come out of the off day.”

The Steelers next practice will be on Wednesday and apparently Coates has said recently that he thinks he might practice for the first time then. Tomlin was relayed those quotes on Monday.

“If he thinks it, then it’s a possibility,” Tomlin said.

The fact that the Steelers waived wide receiver Canaan Severin on Monday in order to sign another outside linebacker could be perceived as a sign that Coates will indeed be removed from the team’s Active PUP list in the next few days.

If Coates is ultimately allowed to resume practicing on Wednesday, it will then be interesting to see if he can get himself back into football shape quick enough to play in the team’s second preseason game Sunday night against the Atlanta Falcons.

At worst, it appears Coates will play in the Steelers final two preseason games and thus still have enough time to make a push for a spot on this year’s 53-man roster as not only a depth wide receiver, but a special teams contributor as well.

Hunter, by the way, didn’t play in the Steelers preseason opener due to an undisclosed injury. He has since returned to practice, however, and is thus expected to make his Steelers debut Sunday night against the Falcons.