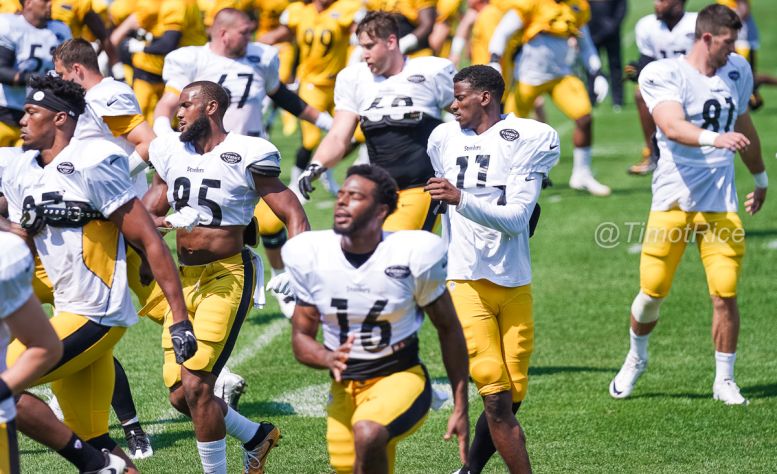 Winners/losers from tonight’s finale, a 17-14 win for the Pittsburgh Steelers over the Carolina Panthers.

Terrell Watson – Watson got the ball early and often. As Mike Tomlin likes to point out, he has a downhill demeanor, rarely getting stopped in the backfield and always falling forward. He averaged 4.7 yards per carry on 19 carries. There’s no guarantee he’ll make the roster but he’s done all he could to state his case. He also did well on special teams, a crucial element of being the #3 running back.

Justin Hunter – It took him until the final game but Hunter had a good strong performance, highlighted by a fingertip 58 yard catch and score down the right sideline. He also appeared to be detailed oriented, showing football IQ to settle versus zone coverage on a third down catch.

Javon Hargrave/Tyson Alualu – While it was strange for both to play well into the second quarter, especially Hargrave, they dominated like you’d expect. Hargrave has had one of the best camps and preseason games of any Steeler.

L.J. Fort – While Tomlin has confirmed Tyler Matakevich is the top backup at both linebacker spots, there’s an argument to be made for Fort being the backside Mack (weakside) linebacker. He’s a strong athlete with sideline-to-sideline range. Led the team in tackles tonight.

Josh Dobbs – Solid performance for him. Good decision-making, kept plays alive with his feet, and led the comeback at the end of the game. Couple of money throws. The touchdown to Hunter was really pretty. We’ll recap that in the morning.

Demarcus Ayers – Ayers began the night on my loser’s list, when it wasn’t clear if he would get any burn as the punt returner. Trey Williams and Cam Sutton worked over him. But when he got his chance, he shined, returning two punts for 14 and 20 yards. He was able to create and decisive getting upfield. While he lacks straight-line speed, he’s got great quickness and that’s a more valuable trait than long speed on punts.

Marcus Tucker – Tucker looks talented when he’s playing with a half-decent QB, like he did tonight with Dobbs (instead of Bart Houston). He did well after the catch and caught two passes from Dobbs on the last drive, including a 34 yarder to set up the game winning score.

Trey Willilams – Ayers’ gain is Williams’ loss. I don’t think Williams had any chance to win a spot on the 53 man roster anyway. But fumbling a punt is a Cardinal Sin for a punt returner and he didn’t get a chance to redeem himself, replaced by Sutton the next time out.

Jerald Hawkins – Hawkins has certainly had an inconsistent preseason and that could describe tonight’s game. Decent as a run blocker but struggled in pass protection, allowing Landry Jones to get hit which resulted in an interception and eventual Panthers’ score. Not the camp/preseason he hoped for.

Jacob Hagen – While Hagen is a big hitter and good tackler when he can square up, he struggles in coverage (the INT doesn’t really count, it was a Hail Mary heave) who is stiff and can’t change directions. Missed a tackle in the alley against the run that went for a long run and didn’t close a seam throw that resulted in a Panthers’ TD at the end of the half.