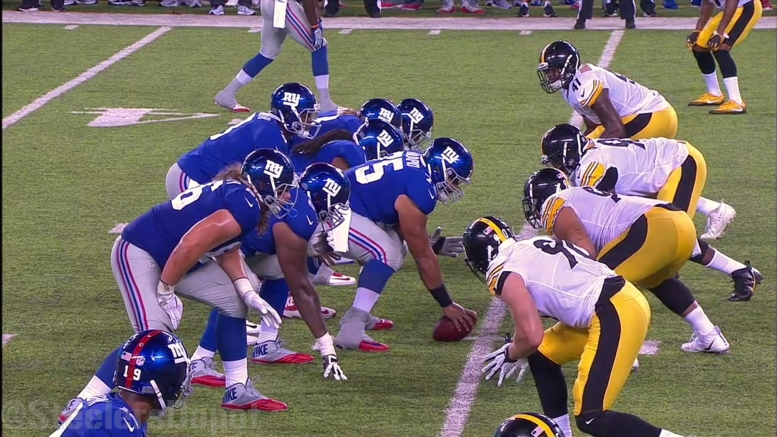 Pittsburgh Steelers football is back, and it couldn’t have come at a better time.

Making the trip to the Meadowlands Friday night to take on the New York Giants in the first preseason game of the season, the Steelers — without the services of some key offensive starters — managed to grind out a 20-12 win over the host Giants, while giving some young players serious looks.

Like I’ll do after every game this season, I’ll take a look at each position group and hand out grades for performances in the game.

Without Ben Roethlisberger or Landry Jones’ services in this one, rookies Josh Dobbs and Bart Houston received the snaps, and it was a very ugly performance for the most part.

Dobbs looked shaky to start the game, throwing an interception due to miscommunication before then following that up with a bad interception on a crossing route where he didn’t see the Giants’ defensive end dropping into coverage.

After throwing the two picks, Dobbs seemed to settle down and found a comfort zone with Cobi Hamilton, hooking up for a big 44-yard strike down the middle of the field before then adding a 28-yard touchdown right before the half to give the Steelers the lead.

Dobbs would have had a second touchdown, this time to Xavier Grimble, on a scramble before uncorking a laser, but a holding call negated the touchdown.

On the ground, Dobbs showed why he is the all-time leading rusher for a QB at Tennessee, scrambling once for 16 yards, making a few defenders miss in the process.

As for Houston, the Wisconsin product looked jumpy in the pocket, rarely set his feet and consistently overthrew targets down the field.

Early on it looked like it was going to be a rough night running the ball due to poor line play and an inability to seemingly get one yard in short yardage situations, but Fitzgerald Toussaint did rip off a nice run of 11 yards before giving way to Knile Davis and Terrell Watson.

Davis showed some good shake in the open field and had some impressive burst on some runs, finishing with 34 yards on eight carries.

It was Watson, though, who stole the show, capping off a nice 15-yard run with a touchdown thanks to a great block on the edge by tight end Jake McGee. Watson also showed some physicality in between the tackles and wasn’t afraid to lower his shoulder to pick up one or two more yards.

On the night, Watson finished with 44 yards and a score on 10 carries, making it harder and harder for the Steelers to let him go.

Hamilton won’t go quietly into the night in a crowded receivers room, finishing with two catches for 72 yards and a touchdown. It’s important to remember how good Hamilton was down the stretch last season; that has to matter in this competition and it has to be something the coaching staff remembers.

Outside of Hamilton, it was a rough day for most of the receiving group, largely due to sporadic quarterback play.

Canaan Severin added two catches for 24 yards, but the Virginia product had a big drop at the sticks, while Marcus Tucker finished with just one catch, but should have had a big day if Houston would have been able to connect on just one deep ball in which Tucker had his man beat.

Such is life in preseason though.

Hopefully JuJu Smith-Schuster is okay. The rookie caught his first pass on the second play of the game, but had to leave the game one series later with a concussion making the tackle following Dobbs’ first pick.

As I mentioned, McGee had the key block to spring Watson for the score, but outside of that one play it was a rather quiet night for Steelers tight ends.

I feel bad for Grimble though; that was a heck of a catch between two Giants defenders while taking a big shot. It’s a shame that was wiped out due to a holding call.

Phazahn Odom had a drop in the game, while the rest of the tight end group saw just one other target.

Without Alejandro Villanueva and Maurkice Pouncey, the first unit of Chris Hubbard, Ramon Foster, BJ Finney, David DeCastro and Marcus Gilbert struggled early with protection and getting a push in the running game against a very stout New York front seven.

Too many times I saw Hubbard in retreat, while the rest of the offensive line really seemed slow out of the gates, especially in the running game.

Once the first unit came out, the backups weren’t much better. The guy who really stood out to me — in a bad way — was Keavon Milton.

He looked lost on a lot of plays and the communication just wasn’t there.

There’s nothing to be worried about here though. Once the full first unit gets back together, the Steelers will get back to being one of the very best offensive lines in football.

This group dominated for long stretches on Friday night, highlighted by the starting unit of Stephon Tuitt, Javon Hargrave and Cam Heyward, who surprisingly played more than anticipated early on.

The trio knifed into the Giants’ backfield early and often, shutting down the running game in the process.

Heyward even added a pass deflection, while Tuitt recorded a QB hit and Hargrave wrapped up Paul Perkins for a tackle for loss on the first drive of the game.

After the trio came out of the game, the Steelers’ backups picked up right where they left off, namely Tyson Alualu, who had one of the best nights of any defender for the Steelers, recording six tackles and one tackle for loss while applying pressure all night long.

This group was very good to start the season, and that’s an encouraging sign for John Mitchell and the rest of the Steelers’ staff.

What a night for pass rushers!

Rookie TJ Watt made quite the debut for the Steelers, hauling down Josh Johnson twice on the first two drives for sacks, while adding five tackles and a pass breakup in his first game as a Steeler.

Veteran Arthur Moats also turned in a stellar performance, showing the Steelers’ staff just what he has to offer this team despite coming into camp on the roster bubble. The veteran recorded six tackles, three sacks, three QB hits and an interception.

If he keeps this up, he’ll no doubt force his way onto the roster.

At inside linebacker, I was really impressed with LJ Fort, who is looking to crack the roster once again. He was up to his usual self, coming up with big hits and really reacting well to what was happening in front of him.

That’s what impressed me the most with Fort was his read and react skills Friday night.

Along with Fort, rookies Keith Kelsey and Matt Galambos were all over the place against the Giants. That’s great two see from a pair of undrafted free agents fighting for a chance to make an NFL roster.

I said in June that Mike Hilton would be a name to watch, and what a game the cornerback had.

Seven tackles, one sack, one tackle for loss, one QB hit and one fumble recovery later and it’s looking more and more like the Ole Miss product will play his way onto the Steelers’ roster.

There’s no doubt Hilton was the best defender on the field Friday night for the Steelers.

Outside of Hilton, Brandon Dixon had a very rough night, wiping out a Steven Johnson interception due to a holding call before then being flagged for pass interference in the second half.

Ross Cockrell had a nice pass breakup in the end zone to force a New York drive to stall, while Brian Allen and Malik Golden teamed up for a solid pass breakup down the field late in the game.

Safeties Jacob Hagen and Jordan Dangerfield were blurs on the field all night, but Hagen and Terrish Webb struggled to wrap up in the open field. I’ll be keeping a close eye on them in my missed tackles report later this weekend.

Kicking and punting won’t be a problem with the Steelers this season, considering Chris Boswell is as steady as they come in the NFL, while Jordan Berry picked up right where he left off last season.

Boswell went 2-for-2 on the night, including a 48-yarder that the veteran kicker drilled, while Berry was true all night long, averaging nearly 46 yards per punt on six attempts for the Steelers.

In the return game, Tucker impressed as a kick returner, showing vision and explosion with the ball in his hands, finishing with 50 return yards on two attempts. Davis had just one kick return attempt and was cut down before reaching the 15-yard line.

Hilton’s fumble recovery came on a punt late in the first half. The second-year cornerback was the first one down the field and ended up circling back to jump on the ball to set up Hamilton’s touchdown.