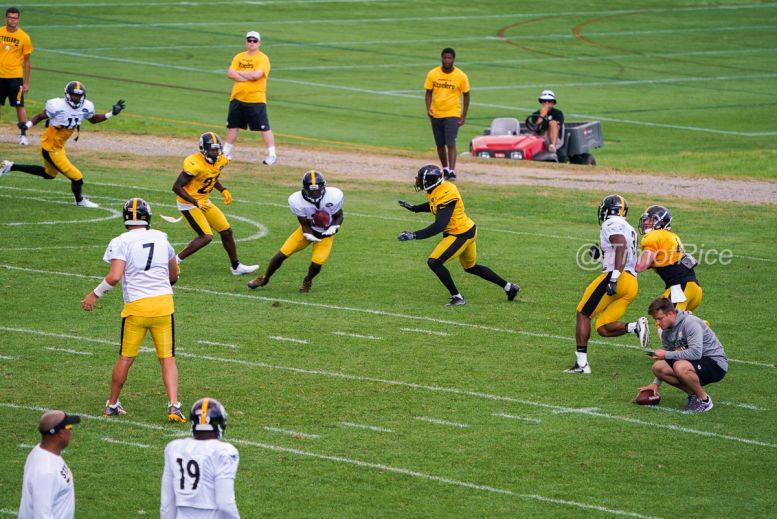 Ben Roethlisberger said he was waiting to test out his Ferrari, Ladarius Green. Now that Ferrari was impounded, Roethlisberger was given a Lambo this offseason. And he’s taking it for a spin.

Speaking with Ron Cook and Andrew Fillipponi yesterday on 93.7 The Fan, Roethlisberger said he likes to challenge his receivers, especially the new guys, with difficult throws in order to see how they respond.

“I like to test these guys in individual routes,” Roethlisberger said. “I never throw it perfect. I can put it on them but why do that? That’s too easy. I want to test their range. I want them to go low, go high,  behind them. Because then, I can see what they’re able to do.”

Roethlisberger gave an example of that from Sunday’s practice, making Justin Hunter work for a pass.

“I threw a ball, Justin ran a dig route, an 18 yard in route. I threw high on purpose, almost trying to overthrow him. He went off on one foot and plucked it out of the air. We all kind of looked around like, ‘wow, that was pretty special.'”

That’s what we noted in our Sunday training camp notes.

“– Back-to-back throws from Ben. Martavis Bryant reached out behind him to snag one and Justin Hunter reeled in the next over his head. Both made it look effortless. Bet Roethilsberger is a happy man.”

Hunter, though inconsistent, has certainly flashed immense physical tools that made him someone the Steelers wanted to bring in. His roster spot isn’t locked up with how deep the position is but Roethlisberger has talked him up every chance he’s gotten.

In the interview, Roethlisberger also praised JuJu Smith-Schuster’s work ethic and downplayed the time Sammie Coates has missed, saying he’s still getting mental reps and knows the offense. With Martavis Bryant back, a great wide receiver group no matter who they keep, the eventual return of Le’Veon Bell, and a top three offensive line, the Steelers offense has the potential to be the best ever.