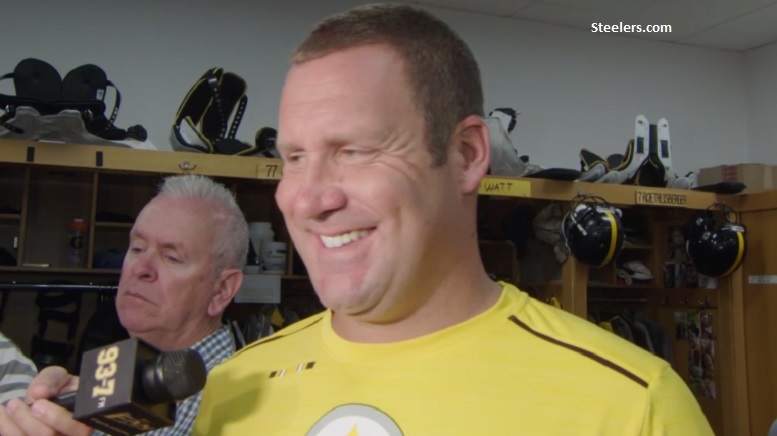 In case you haven’t already figured it out by now, Pittsburgh Steelers quarterback Ben Roethlisberger is likely to play in the team’s third preseason game of 2017 Saturday at Heinz Field against the Indianapolis Colts. While we’ll ultimately have to wait and see how much Roethlisberger plays in that game, the quarterback said Wednesday he’ll probably play two series in total.

“Just a click, to move the ball, pickup first downs,” Roethlisberger said when asked what he’ll be looking for from himself and the rest of the offense during his first preseason action of the year. “Obviously, getting in the end zone is always a big deal but we want to move the ball.”

Roethlisberger’s 2017 debut will also include Steelers offensive coordinator Todd Haley calling in plays to him from upstairs in the coaches’ box and because of that, he was asked Wednesday if he foresees that being a big difference.

“I don’t know,” he said. “We’re going to see. He’s been doing it the last two [preseason] games, but obviously, it’s not with me so we are going to give it one more shot this week and just see what it does. If it makes communication easier, more difficult, what’s going to happen.”

With Haley upstairs once again Saturday night, Steelers quarterbacks coach Randy Fichtner will be on the sideline instead of being the eye in the sky like he’s been in the past.

“Now they just flip flopped which could be good,” Roethlisberger said of Haley’s and Fichtner’s roles changing. “I think it takes distractions away from the play caller but we’ll see. Everyone has got to be comfortable with it.”

While Roethlisberger will see his first action preseason action on Saturday, he’ll do so without having the services of running back Le’Veon Bell, who has yet to sign his franchise tag tender and report to the team. While Bell tweeted Tuesday night that he’ll likely join the team on September 1 and thus after the team’s preseason finale, Roethlisberger said Wednesday he isn’t quite sure yet if that will give the running back enough time to get himself ready for the regular season opener.

“Hope so. We’ll be ready for him whenever he gets here,” Roethlisberger said of Bell.

So, is Roethlisberger overly concerned about Bell missing all of training camp and the preseason this year?

“We always want our guys here but he didn’t have to be here, so we want him here because he’s an amazing football player and he helps this team,” Roethlisberger said. “So, we’ll be excited when he gets here. Hopefully it does not take him long to get into football shape.”

Roethlisberger was also asked how long it will take Bell to get acclimated with all of the changes on offense this year.

“That’s on him and how much studying he wants to do,” the quarterback said. “We’ll do everything we can to get him up to speed and then the rest is kind of on him.”

While Roethlisberger admitted again on Wednesday that he’s yet to hear from Bell personally since training camp started, it doesn’t sound like he has any animosity against him for his texts going unanswered. As for how Bell will ultimately be received by his other teammates once he finally rejoins the team in a few more weeks, Roethlisberger isn’t sure how that side of things will ultimately play out.

“I do not know about that,” Roethlisberger said when asked if Bell has hurt himself among his teammates by holding out as long as he has. “Obviously, we want him here because he’s a brother and we want him here. But I think everyone kind of understands what’s going on. I think you’d have to ask each individual person. There’s no hard feelings from my side. I mean, I’d love to hear back from him, just a text, hey how [are] you doing, but it is what it is.”

Finally, Roethlisberger talked about how long it might ultimately take Bell to get back up to speed with everything and if he might be able to handle a full workload in the team’s regular season opener against the Cleveland Browns.

“He is a physical back and it’s a violent sport,” Roethlisberger said of Bell. “The running back position takes a beating so we just have to hope that the other guys are ready to go if he does need a spell. I don’t know, I’m not him. If he just comes back I don’t know if he’ll be ready to play every single play like he does typically during the season. So, we are going have some other guys ready to give him breaks.”