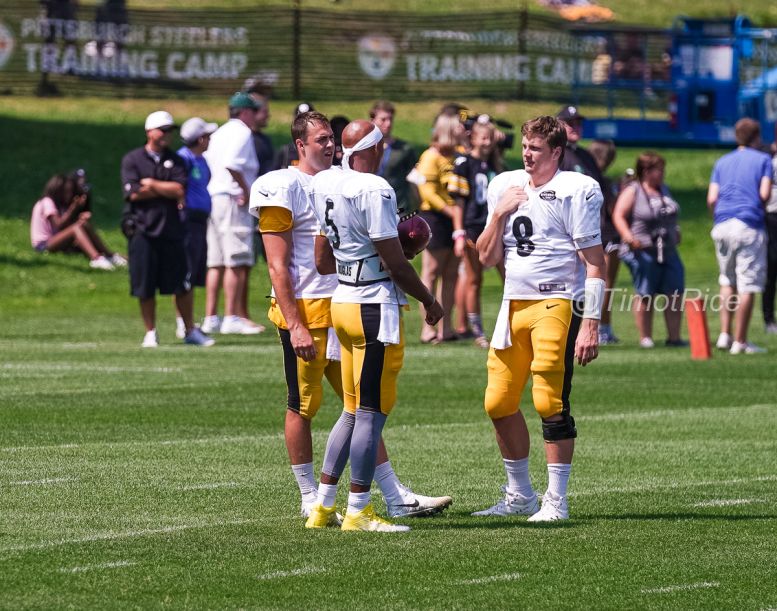 One man’s misfortune is another man’s opportunity, and Pittsburgh Steelers rookie fourth-round draft pick Joshua Dobbs may have just been given an opportunity—but don’t jump the gun.

According to Head Coach Mike Tomlin, the Steelers’ number two quarterback, Landry Jones, suffered an abdominal injury in practice yesterday. Assuming that that causes him to miss some practice time, that should afford the rookie quarterback, Dobbs, plenty of excellent opportunities to see some high-quality reps over the course of the next few days—starting Wednesday, as they are off today—that he might not otherwise have.

With starting quarterback Ben Roethlisberger already nursing a contusion of the birth certificate, which has become an annual issue as he gets older, the fourth-round draft pick was already in a good place to get some good reps this training camp, with the veteran being given days or sessions off.

Should Jones also have to miss time, however, while it is less likely to get Roethlisberger time off, it would give Dobbs more opportunities to work with the second-team unit, and perhaps even see some time running with the first-team offense if they don’t want the starter to be taking every rep in practice.

Now, as I started out saying, don’t jump the gun. This does not suddenly mean that Dobbs is being presented with an opportunity to steal the backup quarterback position away from Jones during training camp. While it is not an impossibility, it is an exceedingly unlikely outcome. All this really means is potentially higher-quality practice reps.

But we likely won’t know whether or not that will even come to fruition until Wednesday, since I would not expect to hear any updates on the health status of any of the Steelers’ ailing players on their day off. Tomlin was not specific about the nature of Jones’ injury, so it is unclear whether or not they even expect him to have to miss any time.

But it would be nice to see, whether it happens or not. Jones has already been in the system for four years now, and has played perhaps more snaps during the preseason than anybody else in the NFL over the course of that time.

Dobbs, on the other hand, has plenty of things that he needs to work on, and he needs the reps—the quality reps—to be able to work on them within an appropriate environment. The Steelers did draft him because they envision him becoming at least a backup.

We should be seeing him quite a bit during the preseason this year, however, perhaps logging more time than even Jones will. Certainly, Roethlisberger will be playing very little, perhaps not at all outside of the third preseason game, as was the case last year.