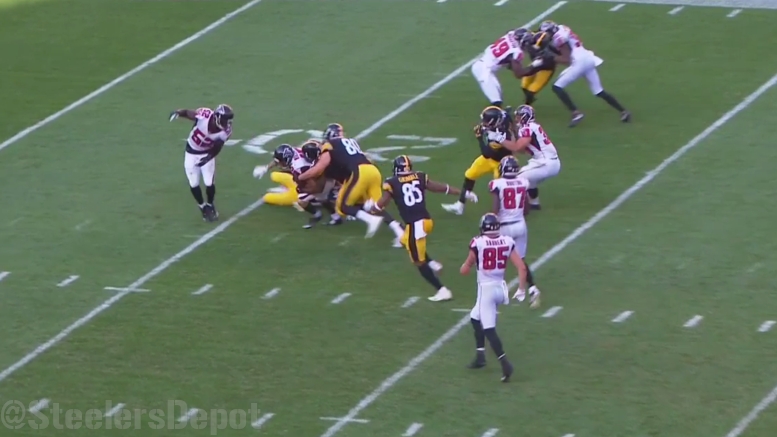 While I would have loved for the Pittsburgh Steelers to have drafted George Kittle, at the moment I’m finding that I am becoming a fan of a tight end that is already on their roster in rookie undrafted free agent Jake McGee.

There is still a lot of combing through last evening’s game tape to go through, but it appears that for the second contest in a row, the recent addition to the 90-man roster has shown up well as a blocker, not simply besting his competition, but doing so in a way that suggests it would translate against higher-level defenders.

I wrote after the first preseason game that I was hoping to see McGee get some higher-quality reps in order to see if he could do what he was doing to the backups of the Giants’ backups. Offhand, I’m not sure that he got any quality reps, but he did at least seem to return a repeat performance.

In the first preseason game, the rookie tight end was the highlight of the best runs that running back Terrell Watson had on the night. Yesterday evening, he was a frequent presence on James Conner’s mini highlight reel, throwing the key block on a number of runs that went for double-digit yardage.

Equally important as the fact that he continued to block well—mostly in the fourth quarter again, admittedly—is that he is also getting a good amount of work on special teams. From what I was able to observe, it appears as though he played virtually every special teams snap during the second half, including both punt coverage and returns, kick coverage and returns, and the field goal unit. He assisted on a tackle on one punt coverage snap.

It is also extremely difficult to evaluate special teams during the preseason. For one thing, there is no coaches tape made available, so you are at the mercy of whatever they happen to show during the broadcast. And therein lies the other problem, because preseason broadcasts are often poor.

A number of times, for example, they cut off the snap on a punt. In another instance, they did not show the ball being kicked on a kickoff. It is rare that you can get a good view of what any particular player is doing on a special teams snap.

But with that said, I did not notice him do anything on these snaps that would indicate he is potentially going to be a liability, even if he was not an active blocking presence during Trey Williams’ touchdown punt return.

Still, the fact that he was a heavy and consistent on special teams during the second half could bode well for his chances of making the 53-man roster. That is how Michael Palmer, a tight end from a couple of years back, originally made the 53-man roster, and he spent two years with the team.