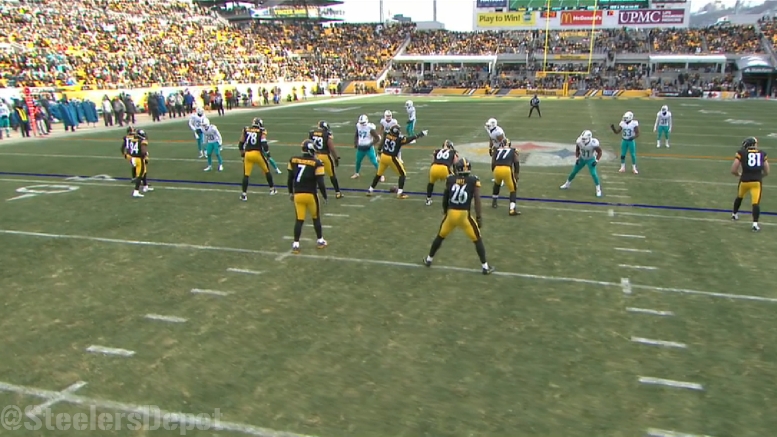 It would seem virtually impossible at this point to find any credible NFL commentator who will not share the opinion that the Pittsburgh Steelers’ offense is brimming with talent and potential this season. Yesterday we talked about one party at least who viewed the team as boasting the best set of offensive ‘triplets’ among quarterbacks, running backs, and pass-catchers in the NFL.

Today, we have Bill Barnwell of ESPN, who is judging the offensive arsenal (that is, the skill-position players) of every team in the league. And he believes that the Steelers’ offense is second-to-none in that regard—well, actually, second to one: the Patriots.

Listing wide receivers Antonio Brown and Martavis Bryant and running back Le’Veon Bell as the headliners of the arsenal, Barnwell writes that “the Steelers can make a case that they have the best running back and the best wide receiver in the league”, and it would be an easy case to make. When fully available, Brown and Bell are perennial first-team All-Pros.

“It’s tough to count on Le’Veon Bell to play 16 games”, he wrote, “but Bell stayed healthy through his 12-game season in 2016 and averaged 157 yards from scrimmage per game. The only players in league history to top that (minimum 10 games) are Priest Holmes in 2002 and O.J. Simpson in 1975”. He notes that “neither of those guys had a receiver as target-intensive as Antonio Brown with whom to split touches”.

Barnwell writes that Brown “had his worst season since his breakout 2013 campaign” but questions, “does anybody really think the five-time Pro Bowler is significantly worse than he was over the previous three seasons?”.

He believes that “the only thing that might keep his numbers down is the return of Martavis Bryant, whose prorated 2015 performance (playoffs included) translates to 79 catches for 1,166 yards and nine touchdowns”.

Barnwell’s one concern about the stability of Pittsburgh’s offensive arsenal is injury, specifically as it pertains to Bell. After all, he has missed games, or had his season ended, by injury in each of his first four seasons.

He writes that James Conner is “not the receiver Bell is”, which of course goes without saying. But the most notable reason that the Patriots place above the Steelers is the lack of a true presence at tight end, with Jesse James being perhaps the most uninspiring starter in the league.

New England, on the other hand, has a pair of impressive tight ends, an improved stable of crafty wide receivers, and a number of running backs with a versatile skill set that they know how to use. Oh, and they have Tom Brady, who tends to get the most out of virtually everybody that he plays with.