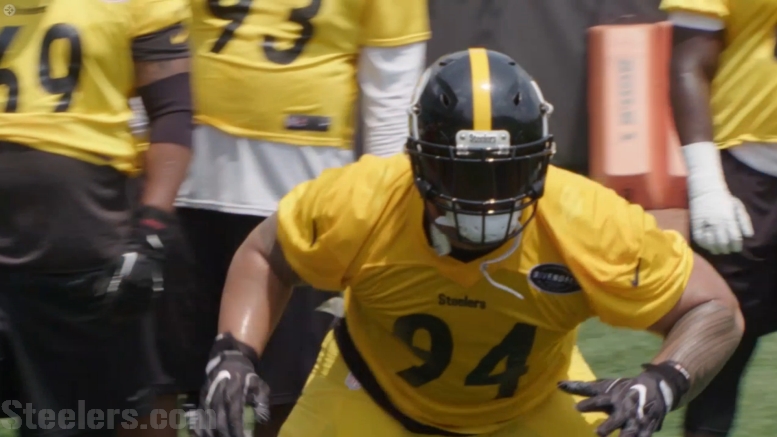 While he may be in his first season with the Pittsburgh Steelers, defensive defensive lineman Tyson Alualu is entering his eighth season overall, and he is bringing with him an unblemished record in terms of staying on the field with regard to his ability to stay healthy.

Through his season seasons, Alualu has only missed two games, and they came at the start of the 2016 season, when he was a healthy scratch for those first two games. He played in all 14 of the rest of the Jaguars games that year, making 10 starts, and registering 37 tackles with two and a half sacks and a forced fumble in the process.

Staying on the field is something that the native of Honolulu takes a great deal of pride in, and it is certainly impressive for a player who has made over 80 starts during a seven-year career to have not missed a game in that span.

Alualu recently answered some questions for a questionnaire segment on the team’s website. One of the questions posed to him was about his approach to football, and he was very matter of fact in stating his goal as always trying “to do things the right way”, and that includes being able to stay on the field.

“I want to give it everything I’ve got when I am out there”, he said in his answer. “I try to be tough, play through adversity, because you always have to face that. Just having a strong mind to push through things”.

The Steelers had their own ironman along the defensive line up until last season. Cameron Heyward never missed a game through his first five seasons, but he suffered about three or four different injuries over the course of the 2016 season that ultimately sidelined him for more than half the year, including a torn pectoral muscle that landed him on injured reserve.

So perhaps it was no coincidence then that the Steelers looked to add a veteran like Alualu who has not only proven to be trustworthy—though not flashy—from an on-field perspective but also has a perfect attendance record. Remember, Stephon Tuitt has already missed four games—plus all but one drive of a fifth—over the last two seasons as well.

Part of his inspiration during his football journey, and his model for toughness, is his uncle, Tupu Alualu, who had a football career of his own in the early-mid-90s, though he never reached the NFL. In three seasons at Hawaii, he recorded 282 carries for 1466 yards and 10 touchdowns.

Tyson said that his uncle played at the same high school that he attended, and his family frequently attended his games both there and during his college career. “Our family going to his games, supporting him, seeing him do well himself, that definitely inspired me to do the same”. I would think that he has done his family proud. His own father and another of his uncles, at least, spent time in and out of prison, so Tupu was probably a bit of a role model.