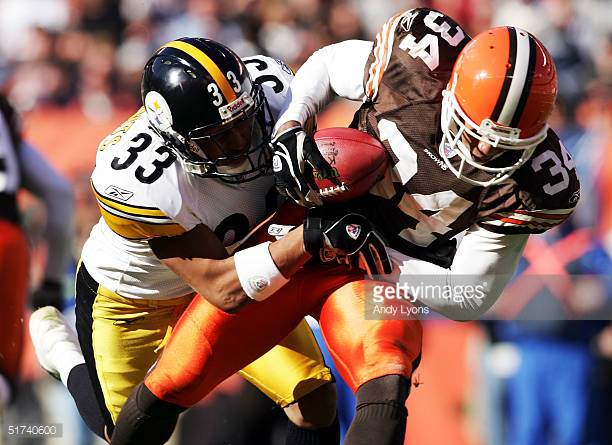 The early 2000s, Super Bowl era Steelers had some really good safeties. Chris Hope is probably still criminally underrated by Steelers’ fans. Troy Polamalu is one of the giants of his generation. And slightly later, Ryan Clark, the perfect foil to Troy.

One name you won’t hear about, or may not remember, is Russell Stuvaints. A Western PA native from McKeesport High School, he went undrafted out of Youngstown State, latching on with the Steelers for the 2003 season. He got onto the roster at some point in the year, I’m not entirely sure if he made it out of camp, and wound up appearing in four games, cutting his teeth on special teams. That ended with one mark on the box score, an assisted tackle.

It appears he was cut by the team out of camp in 2004, quickly added to the New England Patriots’ practice squad. That stint was short lived and the Steelers had him by the next week, calling him up to the main 53. Stuvaints took on a more prominent role in 2004, playing in 15 games and finishing with 31 tackles.

It also came with his first – and only – touchdown. Aaron Smith strip-sacked Jeff Garcia in a 24-10 win over the Cleveland Browns, Stuvaints, seeing time in sub-packages, picking it off the bounce and racing into the end zone. We found the clip, too.

Pittsburgh cut him to begin the 2005 season but brought him back on October 24th when Mike Logan went down with a hamstring injury. For fun, other Steelers axed at final camp cutdowns? Fred Gibson, Walter Rasby, and Alonzo Jackson, among others.

Stuvaints played four games, registering two tackles, and with that, his NFL career was over. Out of football for three years, he was an 11th round pick of the AAFL’s Team Arkansas but the league folded before the season began. The following July, he tried out for the Pittsburgh Phantoms of the Global Basketball League for, uh, reasons. There isn’t any record of what happened, this Trib article talking about the tryout at the time. Only one I could find on the topic.

There’s been trouble off the field. On June 1st, 2008, Stuvaints was shot in the hip outside a restaurant near Pittsburgh. He may have been caught in the crossfire. Four other people were shot in an argument gone wrong. A suspect was arrested the following day but the charges later dropped, the defense pointing to several witness who claimed he was not the gunmen. As I read it, an outcome Stuvaints and the other victims were actually happy about.

Stuvaints got into legal trouble of his own. In July of 2012, he was arrested and charged for harassment, aggravated assault, among other things, after allegedly threatening a woman and then punching a cop when officers arrived. He had to be tasered to get the situation under control.

He pleaded guilty on his lawyers advice but claimed he was innocent. He received probation.

And just last December, he was charged for having a pound of pot. I could not find any more info about the case.

It’s sort of a sad end and I hope Stuvaints is able to stay out of the wrong side of the law. Unfortunately, not every football player has a storybook ending.

Russell Stuvaints, your blast from the past.