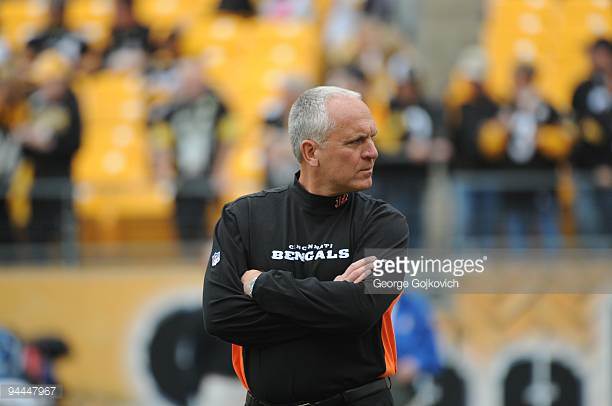 I mentioned this on last week’s The Terrible Podcast but wanted to expand on the idea and have it written down, on record. Richard Mann told reporters during OTAs this was his final year coaching, riding off into the sunset and back into retirement. That’s led some to start thinking about his successor. Most fans circle back to Hines Ward. He’s well-known, well-liked, and played the game the right way.

But Ward would be an unlikely, risky choice. He has zero coaching experience and doing so at the NFL level is a breed of its own. The hours are longer, the task more expansive, and you need the ability to explain, not just do. Playing well and coaching well are two different things and there’s a long line of history to back that up.

Being the fly in the ointment, I wanted to throw out another, more logical choice. It’s still a dart throw and I’ll compile together a more complete list after the season. More coaches will be fired and the team will have additional options.

The name we mentioned on the podcast was Bob Bratkowski. Turning 62 in December, he’ll keep the continuity of tenured coaches who can command the room. Age doesn’t mean a whole lot to me, I’m more interested in just finding good coaches (Cowher, Tomlin were young when hired), but for this position, they’ve proven to find success taking the wise sage (Mann) as opposed to the young gun (Scottie Montgomery, the coach before Mann).

Bratkowski has been coaching football since 1978 at Missouri. He’s bounced around positions on offense, not working strictly with receivers the way Mann has. But it’s always been on the offensive side of the ball; offensive coordinator, quarterbacks coach, and of course, with the receivers as well.

For most of the Steelers’ coaches, there are some common ties. Keith Butler coached with Tomlin on two different stops, Memphis and Arkansas State. Randy Fichtner was the OC at Memphis. Tomlin and Mann worked together in Tampa and three former Steelers are on staff: Joey Porter, Jerry Olsavsky, and Carnell Lake.

Generally, you need some Steelers’ connection. Bratkowski has one. He served as the team’s wide receivers coach from 1999 to 2000, the latter being Kevin Colbert’s first season with the Steelers. His time didn’t end in a firing. Bill Cowher had the task of replacing fired offensive coordinator Kevin Gilbride. The job came down to two men; Bratkowski and Mike Mularkey.

Cowher chose Mularkey. Bratkowski would be poached by Dick LeBeau – head coach of the Cincinnati Bengals – for the same role. There, he would spend nine years as their offensive coordinator before, like most coaches, getting fired. He’s bounced around since. Quarterbacks coach with the Atlanta Falcons the next year, one year as the OC in Jacksonville, a reunion with Cincinnati, and finally, serving as the Titans’ wide receivers coach in 2016. He, ironically enough, by Mularkey, was fired at the end of the year.

Bratkowski has a good track record with receivers. Working with Joey Galloway in Seattle, Hines Ward in Pittsburgh, and Chad Johnson in Cincinnati, he’s more than proven.

Nearly two decades ago, Cowher made a decision that ultimately led to Bratkowski leaving the Steelers. Now Tomlin will have the opportunity to bring him back.