Shot #1 – We’ll start things off this week with a few infographics from Pro Football Focus. The first one shows that the Steelers finished second to the Miami Dolphins last season when it came to best rushing yards after contact average. That’s not overly surprising based on what Steelers running back Le’Veon Bell was able to accomplish last season. As for the Dolphins being first, you can probably thank the Steelers defense for that. Remember that Week 6 game against the Dolphins in Miami and all the yards after contact the Steelers defense allowed?

As for the second infographic, while it’s an interesting stat for quarterback Ben Roethlisberger when it comes to average dropback depth last season, it would be nice if PFF provided some context with it and whether or not those numbers are just hollow. Perhaps they will in the future.

Thanks in large part to RB Jay Ajayi, the Miami Dolphins led the NFL in terms of the highest average yards that came after contact in 2016. pic.twitter.com/EQoifoPBgq

The highest average dropback depths in yards in 2016. pic.twitter.com/tHCKzvgfKV

Shot #2 – Former Steelers two-way player Lou Tepe turns 87 today and he has an interesting backstory. He was drafted by the Steelers in 1953 as a 30th-round draft pick and the 354th player taken overall for starters. He also wasn’t fond of Pittsburgh or the team, judging by this interview with Ron Lippock from a few years ago. Also, in an older Denver Post story, Tepe talked about him trying to get every NFL franchise to contribute $100,000 to an endowment that would fund counseling help at high schools in each NFL city. 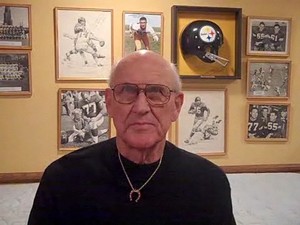 Shot #3 – Steelers wide receiver Antonio Brown held his second-annual softball game on Saturday and paid tribute to the late Dan Rooney. Teresa Varley of steelers.com has all the details from the event in addition to Brown talking about how he plans to honor Rooney during the upcoming season. Oh, the Steelers Junior Reporter was present at Brown’s event as well and filed this report.

Shot #4 – We’re likely to be discussing the contract situation of Bell for a few more weeks. NFL Network analyst Bucky Brooks wrote about Bell a few days ago and explained why he would steer clear of giving Bell a long-term extension right now. He also reached to a few league folks for their opinion on a new deal for Bell and all three he quoted said they wouldn’t sign the Steelers running back to a long-term deal right now.

Shot #5 – I always forget to post this video in my Seven Shots post and that changes today. Remember when the Steelers had to sign punter Shayne Edge in 1996 when Josh Miller was sidelined with an injury? Edge’s first game with the Steelers was against the Houston Oilers and he was ultimately ejected from the contest late after being involved in a fight in the end zone after taking a safety. His subsequent $5,000 fine pretty much meant he played for free in that game. Below is the video of the fight and make sure to watch for the reaction of former Steelers head coach Bill Cowher as it’s pretty classic.

Shot #6 – How about a video of the best plays by Roethlisberger during the 2016 season to keep you entertained for a few minutes on a Sunday? By the way, Roethlisberger is conducting his annual kids camp today and on Father’s Day at that.

Shot #7 – Here is an Associated Press story that appeared in the Pittsburgh Post-Gazette 20 years ago today. Rod Manuel, by the way, didn’t have any stats in his two seasons as a defensive end and only played briefly in just three games during that span. He ultimately landed with the Cleveland Browns in 1999 via the expansion draft. 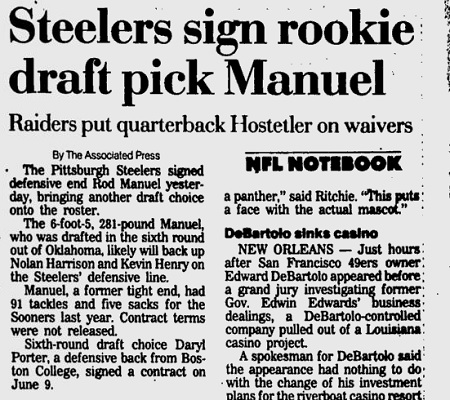