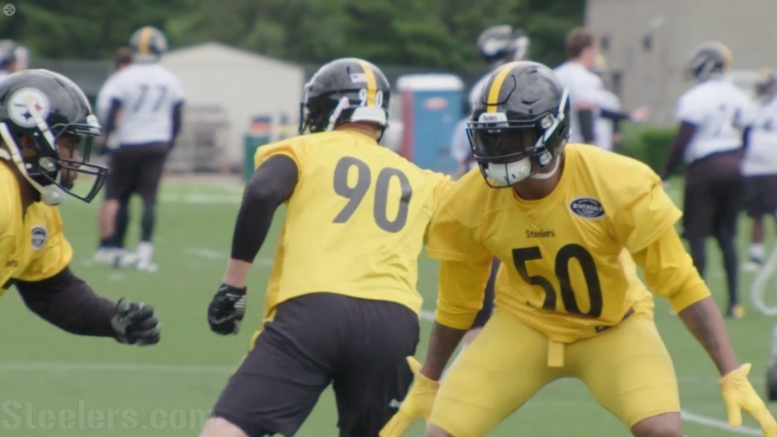 As football in shorts season starts to wind down for the Pittsburgh Steelers, the progress reports on the team’s first-round draft pick, outside linebacker T.J. Watt, remain very positive.

On Tuesday, the Steelers opened their annual mandatory minicamp and according to Aditi Kinkhabwala of the NFL Network, inside linebacker Vince Williams talked glowingly about Watt at the conclusion of practice. Williams reportedly said that Watt is the most-ready rookie he’s ever seen and that he’s never lost mentally.

#Steelers LB Vince Williams says @_TJWatt "is the most ready rookie I've ever seen. Ever." Says mentally, Watt "is not lost ever."

Now, while Williams has only been in the league since 2013, this year marks his fifth mandatory minicamp and thus he’s seen his share of rookie defensive players over that span of time.

After Tuesday’s practice ended, Kinkhabwala told Steelers head coach Mike Tomlin what Williams said about Watt and then asked him if that was a fair assessment.

“Keep watching,” Tomlin said. “We haven’t hit anybody yet, either. Guys tend to get less prepared as the contact increases. We’ll see.”

While we don’t know for sure how much of what Williams said about Watt is hyperbole, the veteran inside linebacker is generally regarded as a straight-shooter just the same. Regardless, Watt said recently that he feels he’s made some progress since arriving in Pittsburgh and especially when it comes to him learning the defense.

“I feel like I know the playbook pretty well,” Watt said recently, according to Teresa Varley of steelers.com. “Not as well as I want to know it. There are a lot of nuances that are tough to understand. But I feel like I am getting the grasp and that is letting me play faster and interact with those guys better.”

The Steelers have two more days of mandatory minicamp yet to get through before taking over a month off before reconvening at Saint Vincent College in Latrobe for the start of training camp. Watt has reportedly been receiving his fair share of first-team reps on the right side of the Steelers defense so far this offseason as veteran outside linebacker James Harrison once again slowly prepares his body for the regular season.

Once training camp gets underway, Harrison will likely still be limited during the early stages so that might result in even more first-team reps for Watt and he certainly can stand to use them. Watt, by the way, is now the only draft pick that remains unsigned as of Tuesday. That will likely change in the very near future, however.

“I know the deal is going to come,” Watt said Tuesday, via Ray Fittipaldo of the Pittsburgh Post-Gazette. “That’s not a problem at all with me right now. I’m just playing football and doing the best that I can on the field.”