Bovada released their 2017 NFL Regular Season MVP odds on Thursday and to nobody’s surprise, New England Patriots quarterback Tom Brady is the early favorite to win the annual award at 4/1. Brady, in case you forgot, has already won the award twice during his lengthy career in 2007 and 2010.

Even though a wide receiver has never won the NFL Regular Season MVP award, Steelers wide receiver Antonio Brown is listed at 50/1 odds to be the first. Atlanta Falcons wide receiver Julio Jones joins him at 50/1 as well.

It’s not unfathomable to think that Roethlisberger could wind up winning the 2017 NFL Regular Season MVP award and especially if all key offensive members remain healthy. If you remember, Roethlisberger hasn’t had the opportunity over the course of the last three seasons to play a long stretch of games with Brown, running back Le’Veon Bell and wide receiver Martavis Bryant all being on the field with him at the same. In fact, only 10 regular season games out of a possible 48 have included those three players being on the field at the same time with 9 of those coming during the 2014 season.

Bryant’s return this year following a year-long suspension should help Roethlisberger and the rest of the Steelers offense out immensely as defenses will be unable to consistently bracket Brown without running the risk of being beat over the top on the other side. The Steelers also spent a second-round draft pick this year on former USC wide receiver JuJu Smith-Schuster, who figures to start seeing the field early and often during his rookie season and potentially predominantly in the slot.

Wide receiver weapons and all, Roethlisberger will still be hard-pressed to throw for 5,000 yards in 2017 and especially if Bell is able to continue producing on the ground like he’s been able to do so far during his career when fully healthy. He doesn’t need to throw for 5,000 to win the 2017 MVP award, however.

Last season, Falcons quarterback Matt Ryan won the NFL Regular Season MVP award after throwing for 4,944 yards and 38 touchdowns with just 7 interceptions. Roethlisberger certainly can post similar numbers in 2017 and especially if he can play much better on the road than he has recently. 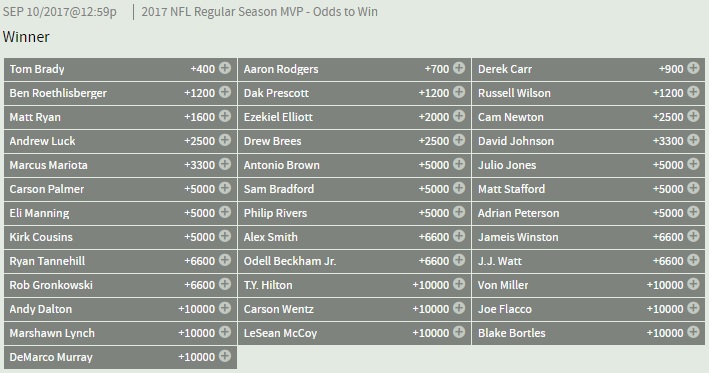